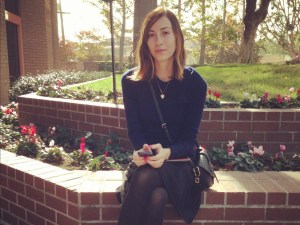 In “Palo Alto,” which opens Friday, May 23, Emma Roberts plays a young woman who is torn between an illicit flirtation with her soccer coach (James Franco) and an unrequited crush on a sweet stoner (Jack Kilmer).

Listen to “Breakthrough Entertainment’s” full interview with Coppola by clicking HERE. The following is an excerpt from the interview in which the writer/director discusses her motivations for the movie.

“[James Franco and I] got introduced at a party by my mom. I had just finished college as a photography major. I sent him my photographs and we wanted to work together in some way. He said that he had this idea of making his book into a feature film and he thought that it would be a good fit [for me]. I really loved his book when I read it and was excited by the opportunity because filmmaking felt like an extension of photography.

“What originally drew me to these stories was that they felt very realistic. The depictions of the emotions of that age was really raw and realistic and the dialogue was really spot-on. I had just finished college so I had enough of a separation to understand my awkward teenage years a little bit better whereas at the time it just felt really painful.

“In order for me to understand the characters and be helpful to my actors, I really had to dig deep within myself to figure out why the characters were acting the way they were. I feel like we are all human beings and we are all very complex. Nothing is black and white so I tried to portray people that way.

“There are definitely some dark stories in [James Franco’s] book. I didn’t necessarily experience some of those issues myself but I knew that that stuff was going on. I felt like my job as a creative person was to find a way to make that work within my comfort zone because these are important stories to tell. I hope that when people watch this movie they can connect to the emotions and maybe feel less alone.” – Gia Coppola