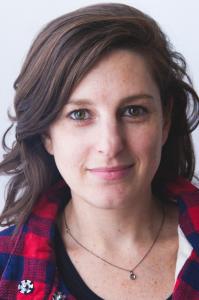 In “Obvious Child,” which opens Friday, June 13, Jenny Slate plays a stand-up comedienne whose unplanned pregnancy forces her to confront the realities of independent womanhood for the first time.

Listen to “Breakthrough Entertainment’s” full interview with Robespierre by clicking HERE. The following is an excerpt from the interview in which the writer/director discusses her inspiration for the movie’s main character, its pro-choice backdrop and its comedic tone when dealing with sensitive subject matter.

“Donna is not me or Jenny [Slate]. Donna is somebody who I think is relatable. Her tone is honest. I think that we just had this urge and desire to make a story that was about a real woman doing real things about a choice that we had not really seen in movies. It had been on the peripheral and there are many ways that a woman can deal with unplanned pregnancy. This choice that we are showing in ‘Obvious Child’ is something that one in three women will have gone through in their lives. That is just a statistic that I have read. I am definitely not an expert.

“It’s not every woman’s story. I just think that we are telling an authentic story for this character – for this one woman. I think that no matter who is talking about it – whether they are [pro-life] or [pro-choice], whether they like the movie or do not like the movie – it is a good thing. I am OK with either side voicing their opinion. What is not OK is when somebody from the pro-life movement criticizes the movie without having seen it. That is a little annoying. But, either way, I am looking forward to a true conversation.

“I think that tragedy and comedy are very close together. When we sat down to write Donna’s tone, it was very similar to the tone that my friends and I have. We are kind of funny people. When big things happen in our lives, sometimes using comedy is not just a deflection. It is like actual medicine, helping you deal with big and small experiences in your life; tragic or not so tragic; from getting dumped to stubbing your toe to fighting with your parents – all of those things. It just feels like this character is a naturally funny person so she is going to be herself no matter what we dealt her. And we throw a lot at her.” – Gillian Robespierre