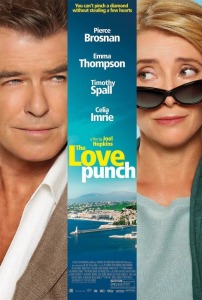 In “The Love Punch,” which opens Friday, May 23, Pierce Brosnan and Emma Thompson play a divorced couple who, after their pension is stolen by an unscrupulous businessman, reunite to steal it back.

Listen to “Breakthrough Entertainment’s” full interview with Hopkins by clicking HERE. The following is an excerpt from the interview in which the writer/director discusses his motivations for the movie.

“[‘The Love Punch’] is about two people who were once in love and for whatever reason fell out of love. Through an unfortunate thing that happens to them – their pension is stolen in a business scam – they have to team up to go after what is rightfully theirs. In the process, they start to feel things for each other again. That is the romantic side of it.

“I feel a lot more vulnerable after [‘The Love Punch’] than I did after [‘Last Chance Harvey’]. I don’t know why because this is a joyful comedy yet I feel a lot more sensitive after it. But [the ultimate takeaway for me personally is to] just keep at it. Keep going and just keep trying to work. I very quickly get lose momentum because I write my own scripts and it takes a lot for me to get back on the writing treadmill. So just keep going and keep at it. That is my takeaway. It ain’t over.” – Joel Hopkins