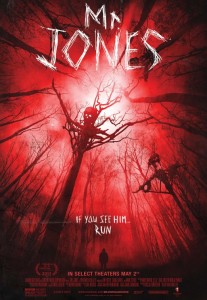 In “Mr. Jones,” which will be available beginning Tuesday, May 6 on Blu-ray and DVD, Jon Foster and Sarah Jones play a couple who move to a remote cabin only to discover that they are not alone. An infamously reclusive artist lives nearby and only comes out at night when he drags his strange, sinister sculptures deep into the woods.

Listen to “Breakthrough Entertainment’s” full interview with Mueller by clicking HERE. The following is an excerpt from the interview in which the writer/director discusses his motivations for the movie.

“I grew up in rural Minnesota and spent a lot of time around the lake and the woods. When you are a kid and you are kind of bored, you make up stories about people living around there. There is a fair share of hermits and shut-ins there that your childhood imagination makes more of than is probably going on there. So I always thought that was kind of fun.

“There is also this Tom Waits song called ‘What is he Building in There?’ that is this very strange spoken word thing told from the perspective of a neighbor who has been keeping watch on this strange guy on his block for all these years. I have always been interested in these stories about being interested in your neighbors and what might be going on with them.

“I want people to go to this movie with an open mind. I am trying to do something a little different in the horror genre. It starts off as found-footage and it sort of morphs into something much weirder and hopefully sort of captures a little bit of the fabric of nightmares. That is something that we can all relate to and that we all experience – not every night but throughout our lives. That is the kind of thing that we are trying to explore in this movie. So just be open to that. And if you do that, it is a pretty fun little ride.” – Karl Mueller