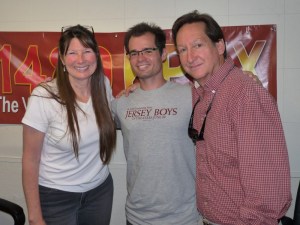 In “50 to 1,” which opened Friday, June 20, a misfit group of New Mexico cowboys find themselves on the journey of a lifetime when their crooked-footed racehorse qualifies for the Kentucky Derby. They face a series of mishaps on their way to Churchill Downs, becoming the ultimate underdogs in a final showdown with the world’s racing elite.

Listen to “Breakthrough Entertainment’s” full interview with Conroy and Wilson by clicking HERE. The following is an excerpt from the interview in which the filmmakers discuss their motivation for the movie.

“‘50 to 1’ is a true-life story that took place in 2009 – just 5 years ago. This unheralded racehorse named Mine That Bird won the Kentucky Derby. It was the most amazing race that I have ever seen. I have owned horses for 25 years in Los Angeles, raced around the world, made documentaries on racing and all kinds of movies but I have never seen a race quite like this.

“This is really about underdogs making it and trailering their horse cross-country to Kentucky. It is a bit of a class system film as well. They took on the bluebloods of Kentucky and kicked their [butt]. It is a really inspiring picture. There is no insight that you have to have into horseracing to understand this movie. These are guys who are down on their luck and have a dream. That is what it is all about.” – Jim Wilson

“You will be overcome with emotion. This incredible race that you see just takes you away. It is uplifting and you don’t get that very often anymore. We wanted something that was different; something that people could actually sit down and be entertained – not offended or upset or have something twisted happening in front of them. This is just a great, feel-good family film.

“It is about, as they say in the movie, getting out there and taking chances. It is about following something even when everybody tells you that you are a fool. You go out there and do it anyway because this is what you want and this what you believe in and you are not going to give up your dream. That is what this movie is about. It really is. It has got a horseracing backdrop but it is about that message.” – Faith Conroy