Among the new movies that were released Friday, Feb. 19 are a western starring real-life father and son Donald Sutherland and Kiefer Sutherland and a horror anthology that takes place on a desolate stretch of desert highway. 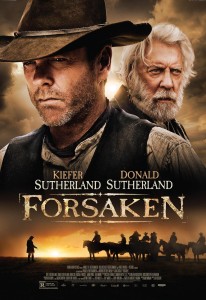 Kiefer Sutherland plays a man who must make amends with his estranged father (Donald Sutherland) in order to protect their home from relentless land-grabbers. (R – 90 minutes)

“Forsaken” embraces the classic western’s roots and embodies them in such a way that will very much please fans of the genre. Granted, it does not necessarily bring anything new to the table but that is precisely why it works so well. Director Jon Cassar has constructed a piece of cinema that is essentially a blast from the past – pleasantly old-fashioned in not only its narrative approach but also its atmosphere and characters. The plot’s pacing and development take a bit of a dip in the second act but the final showdown is sheer movie magic. (3 Stars) 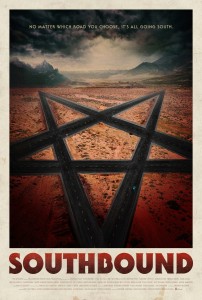 Five interlocking tales of terror follow the fates of a group of weary travelers who confront their worst nightmares – and darkest secrets – over one long night on a desolate stretch of desert highway. (NR – 89 minutes)

“Southbound” is an eerie ride that is certain to stick with you long after you have left the movie theater. The new horror anthology features five fables, each equally unique and unnerving in their own way. The best of the bunch – a story about an accident – is worth the price of admission in and of itself, making for a psychologically unsettling and visually revolting experience. Each vignette is tied – some directly and others loosely – to the next thereby creating a creepy collection that requires a strong seat belt. This is indeed one deeply disturbing drive. (3 Stars)