Among the new movies that were released Friday, March 4 are a biographical war dramedy starring Tina Fey and a new animal-themed animated adventure from Disney. 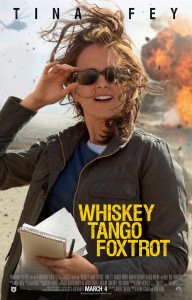 Tina Fey portrays journalist Kim Barker who takes an assignment in a war zone. There, in the midst of chaos, she finds the strength she never knew she had. Other stars include Margo Robbie, Martin Freeman, Alfred Molina and Billy Bob Thornton. (R – 111 minutes)

“Whiskey Tango Foxtrot” succeeds in its attempts to walk the fine line between serious drama and jovial comedy, often wavering back and forth from either side of said line to create a tone that is entertaining without sacrificing substance. The new biographical war dramedy owes much of its effectiveness to star Tina Fey, who possesses the unique ability to be simultaneously silly and sincere and – thanks to her years behind “Saturday Night Live’s” Weekend Update desk – makes for quite the convincing journalist. The story sometimes spins its wheels, lacking a forward-propelling force, but as a day… er… few years in the life piece, it is worthwhile if not ultimately unilluminating. (3 Stars) 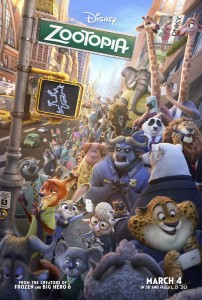 “Zootopia” boasts all of the best qualities of the two animals at the center of its story. It is clever like a fox, cute like a bunny and moves at a faster pace than both creatures combined. In fact, the film is one of Disney’s best animated adventures in recent memory. A host of hilarious animal puns, several sly nods to other Disney projects, eclectic characters, vivid animation and an enchanting narrative make this a movie fort which both children and adults will go ape. And as if all that were not enough, it features a far-reaching theme that poignantly tackles prejudice. (4 Stars)