‘Girl Like Her’ is admirable, ‘Home’ is colorful and ‘Serena’ is a snore

Among the new movies that were released Friday, March 27 are a mockumentary about bullying, an animated adventure about aliens and a drama that re-pairs “Silver Linings Playbook” stars Bradley Cooper and Jennifer Lawrence. 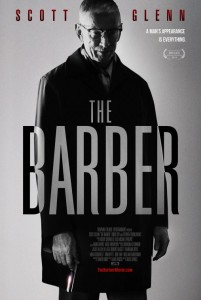 Chris Coy plays a young man who, 20 years after his police detective father takes his life over the despair of his inability to solve a serial killer case, sets out to bring said case to resolution in a completely unexpected manner. Scott Glenn also stars. (R – 95 minutes)

If “The Barber” were to be judged on star Scott Glenn’s performance alone, one would have no choice but to recommend rushing out to see it. The veteran actor indeed does a wonderful job with a provocative role. Thanks to Glenn’s ingenuity, you never quite know what to think of his character but you do know he makes the hairs on the back of your neck stand up straight. Unfortunately, the story is chock-full of cliches and – while suspenseful at first – it eventually veers into a predictable conclusion that is made even worse by way too much dialogue. (Thumbs Down!) 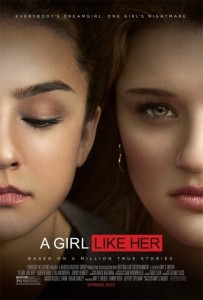 Lexi Ainsworth plays a teenager who is victimized and bullied by her former friend (Hunter King). With the help of her best friend (Jimmy Bennett) and a hidden digital camera, evidence of the relentless harassment threatens to come to light bringing both girls and their communities face to face with the truth. (PG-13 – 92 minutes)

“A Girl Like Her” is an admirable yet ultimately unfulfilling feature film. The new fictional drama, which was filmed to look like a documentary, certainly has a strong moral conscience as it tackles the bullying issue from both sides in a way that feels fairly authentic but it far more resembles a predictable after-school special than that it does satiating entertainment. It may be unfair to the movie’s valuable motivations but the viewer keeps waiting for a shocking twist of some sort. Instead, they get a mildly enlightening lesson from a perceptive perspective. Unfortunately, it goes down more like cinematic medicine than something sincerely satisfying. (Thumbs Down!) 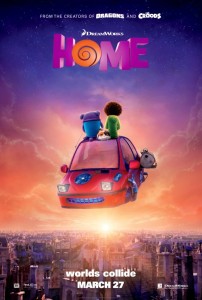 Jim Parsons voices a lovable misfit from another planet who lands on Earth and finds himself on the run from his own people. He forms an unlikely friendship with an adventurous girl (Rihanna) who is on a quest of her own. (PG – 93 minutes)

“Home” may be one of the most imaginatively colorful animated adventures released in recent years. Its bright visuals and incessant energy keep audience members of any and all ages amused and therefore less likely to be bothered by the fact that the film feels ephemeral. The story is heartfelt enough, evoking key emotions while also reflecting respectable morals, yet it still cannot escape an overwhelming sense of frivolity. Then again, cheerful tomfoolery has its benefits – especially when it is conveyed through a script as witty as this not to mention delivered by characters as charming as these. (Thumbs Up!) 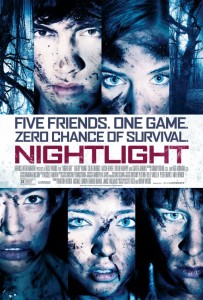 Undeterred by the news of a classmate who recently took his life in those woods, five teens journey into the forest for an evening of flashlight games and ghost stories. But their plans go awry when the friends awaken a demonic presence, an unseen evil that will seize upon their deepest fears – and plunge them into a nightmare of absolute terror. (R – 84 minutes)

The novelty of “Nightlight” is initially intriguing as the new found-footage flick’s characters play dangerous games that are not unlike those played by real half-witted teenagers. And you have got to admit that writers/directors Scott Beck and Bryan Woods take impressively full advantage of the genre’s various ingenuities, making for a creative visual experience. But novelty has a way of wearing off quite quickly, especially in an atmosphere that is absent of any story. So, soon, the thriller becomes nothing more than noise as its irritatingly unintelligent teens scream in the dark. (Thumbs Down!) 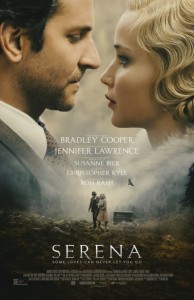 Bradley Cooper and Jennifer Lawrence play lovestruck newlyweds who, in 1920s North Carolina, begin to build a timber empire. With power and influence in their hands, they refuse to let anyone stand in the way of their inflated love and ambitions. (R – 109 minutes)

It is difficult to look away from “Serena” and even more difficult to dislike it. After all, it re-pairs “Silver Linings Playbook” and “American Hustle” stars Bradley Cooper and Jennifer Lawrence – both of whom give great performances despite the new historical drama’s many shortcomings. However, simply watching and actually enjoying are two drastically different things as the plot’s pace limps along and lacks anything of notable significance to say thereby leaving viewers listless and ultimately unmoved. Still, the two stars are not the only good-looking aspects of the movie as its setting and cinematography are continuously engrossing. (Thumbs Down!)