Among the new movies that were released Friday, May 22 are a thought-provoking thriller starring Ethan Hawke, a western starring Michael Fassbender and a Disney Parks attraction-turned-adventure-flick starring George Clooney. 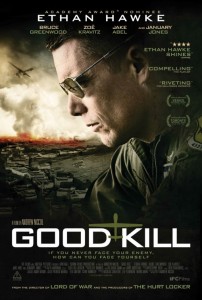 Ethan Hawke plays an Air Force pilot who, after six tours of duty, now fights the Taliban from an air-conditioned box in the Las Vegas desert. When he and his crew start taking orders directly from the CIA, his nerves – and his relationship with his wife (January Jones) – begin to unravel. (R – 100 minutes)

“Good Kill” is a highly intelligent and thought-provoking motion picture that also manages to be quite the compelling thriller. Writer/director Andrew Niccol’s new project tackles the timely topic of drone warfare in such a way that encourages post-viewing discussion from a very human perspective. Its centerpiece is star Ethan Hawke, who perfectly portrays the ever-increasing stress and decreasing self-respect that we might expect from a man in his precarious position. Fortunately, the film does not solely stimulate one’s mental muscles but also generates genuine tension and emotional unrest – especially during each bloodcurdlingly calibrated airstrike. (Thumbs Up!) 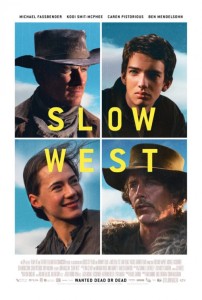 Kodi Smit-McPhee plays a young man who, at the end of the nineteenth century, journeys across the American frontier in search of the woman he loves (Caren Pistorius). Along the way, he is joined by a mysterious traveler (Michael Fassbender) and hotly pursued by an outlaw (Ben Mendelsohn). (R – 84 minutes)

To “Slow West’s” credit, at least the new western warns you about its sloth-like pace right from the get-go. Even at a paltry 84 minutes, writer/director John Maclean’s debut feature feels like it takes place over an eternity as its characters mosey along the frontier until finally arriving at a conclusion that is pretty pointless and renders the viewer’s excruciating efforts to remain awake a tremendous waste of time. Its sole takeaway seems to be the same simple message relayed by “A Million Ways to Die in the West” – which was at least a lot more fun to watch. (Thumbs Down!) 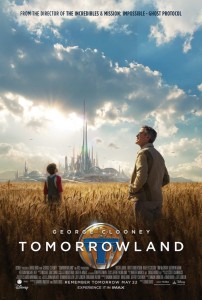 Britt Robertson plays a young woman who embarks on a danger-filled mission with a former boy-genius (George Clooney) to unearth the secrets of an enigmatic place somewhere in time and space known only as Tomorrowland. (PG – 130 minutes)

“Tomorrowland” starts its story at the 1964 World’s Fair – the venue that Walt Disney used to unveil a couple of his Audio-Animatronic-populated attractions that are now Disney Parks staples, including “It’s a Small World.” These first few minutes are wonderfully magical. Then we back up… er… fast-forward and the new adventure film trades enchantment for entertainment – a quality the movie maintains through to its conclusion. However, at about the halfway point, things begin to get a bit bizarre and befuddling. Still, its message is inspiring and its ideas are imaginative thereby justifying enjoying the relatively uneven ride. (Thumbs Up!)