‘Green Inferno’ shocks, ‘Pay the Ghost’ spooks and ‘Time Out of Mind’ haunts

Among the new movies that were released Friday, Sept. 25 are Eli Roth’s long-awaited cannibalism thriller, an early Halloween treat starring Nicolas Cage and a drama in which Richard Gere plays a homeless, mentally-ill man. 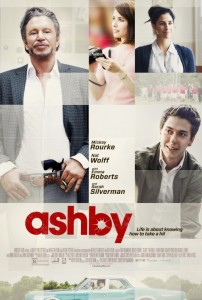 Nat Wolff plays a young man who is given an assignment to interview an older person and turns to his mysterious neighbor (Mickey Rourke) for help. That new connection leads to unexpected journeys for both of them, as the neighbor – who turns out to be a retired CIA assassin – deals with a terminal prognosis and the young man deals with adjusting to life with his newly single mom (Sarah Silverman) and developing relationship with a brainy classmate (Emma Roberts). (R – 100 minutes)

“Ashby” is one of those movies that wants to be so many different things that it forgets to actually be good at one of them. The new dramedy features several story strands and dueling tones, all of which makes for a film that fails to retain viewers’ interest much less affect them on the emotional level that its final moments suggest it aspired to. While star Mickey Rourke gives an appealing performance, his title character’s tale is far less entertaining or engaging as the coming-of-age subplot driven by co-star Nat Wolff. Meanwhile, Emma Roberts’ talent goes completely unused. (Thumbs Down!) 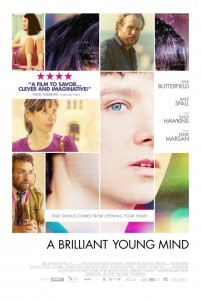 Asa Butterfield plays a socially awkward teenage math prodigy who finds new confidence and new friendships when he lands a spot on the British squad at the International Mathematics Olympiad. (NR – 111 minutes)

“A Brilliant Young Mind” may at first feel like it it going to tread a well-worn path and therefore be predictable and prosaic but it quickly becomes apparent that the new drama has much more emotional depth up its sleeve. The International Mathematics Olympiad is merely a cog in a much larger wheel when it comes to the British import, as the story surrounds the human connections that are made. And said connections are genuinely touching thanks to the actors’ nuanced performances, with Asa Butterfield leading the way as a young man who comes of age in a way that is far more meaningful than winning some competition. (Thumbs Up!) 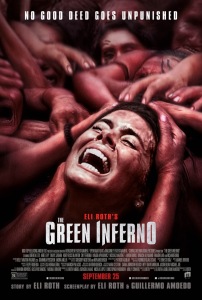 Lorenza Izzo, Ariel Levy, Aaron Burns, Kirby Bliss Blanton and Daryl Sabara play a group of student activists who travel from New York City to the Amazon to save the rainforest. However, once they arrive in this vast green landscape, they soon discover that they are not alone – and that no good deed goes unpunished. (R – 103 minutes)

“The Green Inferno” is an acquired taste. That is to say, the new Peruvian jungle-set shocker is certainly not for everyone as most moviegoers will likely be unable to stomach the gory, gruesome and grotesque images that are placed on display. However, those who have an appetite for bloodcurdling carnage will be in hog heaven as writer/director Eli Roth has undoubtedly outdone himself here, serving up a nauseatingly blood-soaked thriller. It is a fantastically frightening feast from beginning to end, cooking up horror that is insanely intense, incredibly creative and has a definitively distinct flavor. (Thumbs Up!) 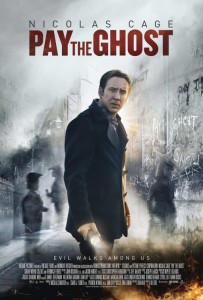 Nicolas Cage plays a man who, one year after his young son disappeared during a Halloween carnival, is haunted by eerie images and terrifying messages he cannot explain. Together with his estranged wife (Sarah Wayne Callies), he will stop at nothing to unravel the mystery and find their son – and, in doing so, he unearths a legend that refuses to remain buried in the past. (NR – 94 minutes)

“Pay the Ghost” has extraordinary potential but wastes it all in favor of a screaming banshee. The first third of the new supernatural horror flick sets up its story well, sending chills down its viewers’ spines while also encouraging their imaginations to come up with all of the various explanations – both logical and illogical – that could potentially be found further down the film’s path. Unfortunately, the explanation that is selected is the least imaginative of them all and therefore also the least compelling. There is an awful lot of spookiness in store but very few legitimate scares, making the movie more Halloween trick than treat. (Thumbs Down!)

‘Time Out of Mind’ 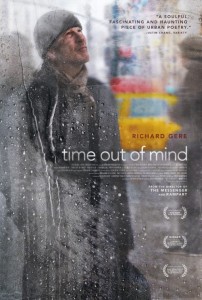 Richard Gere plays a homeless, mentally-ill man who, drifting through the city looking for food, alcohol and shelter, takes advantage of some social services but lacks the proper paperwork to get the financial assistance he needs. He also tries to make contact with his estranged daughter (Jena Malone) and befriends a fellow homeless man (Ben Vereen) who claims to have been a successful jazz musician. (NR – 117 minutes)

“Time Out of Mind” is somewhat slow and meandering but it is also a little mesmerizing as it mimics the depressing day-to-day existence of someone who is simply trying to survive on the streets. Star Richard Gere is excellent, pulling hard on your heartstrings due to his disheveled appearance and dispirited demeanor. Granted, writer/director Oren Moverman’s new socially conscious drama demands an awful lot of viewers but those who stick with it are rewarded with rich insight and emotion that can only be described as haunting and hard to shake. (Thumbs Up!)