‘Holidays’ is a creatively creepy collaboration

Among the new movies that were released Friday, April 22 is a horror anthology comprised of eight freaky fairy tales, each centered around a different holiday. 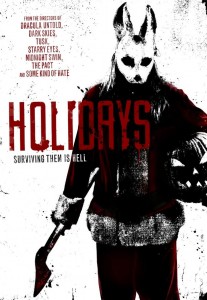 All of the directors whose vignettes appear in “Holidays” know that the most effective path to scares is to take something innocent and turn it on its head so that it is forever defiled in our mind. The new horror anthology is comprised of eight freaky fairy tales, each centered around a different holiday. Although some of the ties to said holidays are a little loose, the stories are all undoubtedly deeply disturbing and therefore amusingly memorable. Independence Day and Thanksgiving are notable omissions but that only further illustrates the need for a sequel to this creatively creepy collaboration. (3 Stars)