‘Homesman’ is strange, ‘Mockingjay’ is uneventful and ‘White Bird’ is awkward

Among the new movies that were released Friday, Nov. 21 are a western written and and directed by star Tommy Lee Jones, the first half of the finale of “The Hunger Games” franchise and a coming-of-age drama in which “Divergent” star Shailene Woodley flaunts her sexuality. 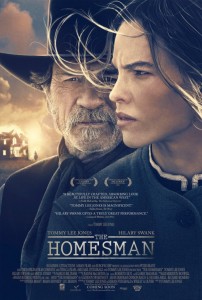 Hilary Swank plays a woman who employs a low-life drifter (Tommy Lee Jones) to help her transport three mad women by covered wagon to Iowa where a waiting minister and his wife (Meryl Streep) have offered to take the women in. But they first must traverse the harsh Nebraska Territories marked by stark beauty, psychological peril and constant threat. (R – 122 minutes)

“The Homesman” may be a strange movie but it is one that manages to keep viewers engaged throughout its winding and often grim path with several remarkable performances – most notably one by Tommy Lee Jones who also wrote and directed the new dramatic western. Some moviegoers will be put off by an abrupt narrative shift three-quarters of the way through while almost everyone will be at least a little perplexed upon the conclusion but Jones skillfully presents a cinematic story that leaves a lasting impression due to its different and likely much more realistic portrayal of old-fashioned frontier life. (Thumbs Up!) 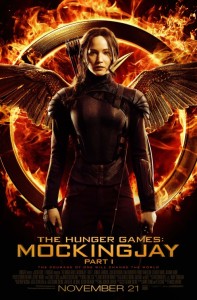 Jennifer Lawrence reprises her role as Katniss Everdeen who, under the leadership of President Coin (Julianne Moore) and the advice of her trusted friends, spreads her wings as she fights to save Peeta (Josh Hutcherson) and a nation moved by her courage. (PG-13 – 123 minutes)

“The Hunger Games: Mockingjay – Part 1” may as well have been titled “The Hunger Games: The Calm Before the Storm” – which is a nice way of saying that the third installment in the film franchise based on author Suzanne Collins’ series of young adult novels is a mostly uneventful precursor to next year’s grand finale. This is only half of a movie and, as such, really only worth half the price of a movie ticket. Having said that, it does a sufficient job of building tension, tightening its grip around viewers’ throats until an absolutely electrifying last act. (Thumbs Up!) 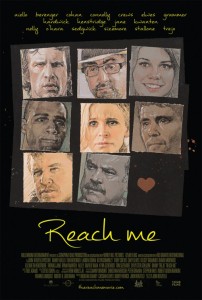 A motivational book written by a mysterious man (Tom Berenger) goes viral and quickly gains popularity, inspiring a group of people that includes a journalist (Kevin Connolly), his editor (Sylvester Stallone), a former inmate (Kyra Sedgwick), a hip-hop mogul (Nelly), an actor (Cary Elwes) and an undercover cop (Thomas Jane) to re-evaluate their choices and decisions by confronting their fears in hopes of creating more positive lives. (PG-13 – 95 minutes)

Do not be blinded by the stars; “Reach Me” is akin to a black hole. How the new drama managed to attract such a talented ensemble may forever remain a mystery. Similar to “Crash” and “Disconnect” in its “everything is connected” theme, writer/director John Herzfeld has a hard time juggling his many storylines, none of which are particularly interesting much less capable of standing on their own hobbled legs. Moreover, the actors all seem somewhat bewildered about their roles. The culmination of it all is mildly stimulating but lacking any emotional impact due to muddled nature of everything leading up to it. (Thumbs Down!)

‘White Bird in a Blizzard’ 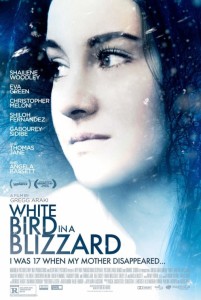 Shailene Woodley plays a young woman whose mother disappears. As time passes, she begins to come to grips with how deeply her mother’s disappearance has affected her. Returning home on a break from college, she finds herself confronted with the truth about her mother’s departure – and her own denial about the events surrounding it. (R – 91 minutes)

“White Bird in a Blizzard” is part coming-of-age flick, part mystery movie. The mystery may be designed to be a backburner catalyst to star Shailene Woodley’s character’s maturation, but it winds up being the better part of the plot. Granted, this is no “Gone Girl” but it is intriguing enough to keep us interested and engaged until the out-of-left-field conclusion. Having said that, it is a bit awkward to see the “Divergent” star flaunt her sexuality so early in her budding career and some misguidedly ethereal artistic choices are much more prosaic than they are creative. (Thumbs Up!)