‘Hunt for the Wilderpeople’ 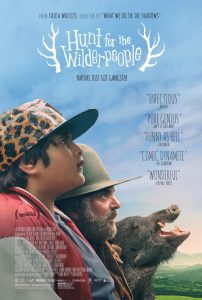 Julian Dennison plays a defiant city kid who gets a fresh start in the New Zealand countryside with a new foster family. When a tragedy strikes that threatens to ship him to another home, he and his uncle (Sam Neill) go on the run. As a national manhunt ensues, the newly branded outlaws must face their options: go out in a blaze of glory or overcome their differences and survive as a family. (PG-13 – 101 minutes)

Writer/director Taika Waititi plays it a bit too safe with “Hunt for the Wilderpeople” but that perhaps only helps it be an appropriate source of entertainment for younger audiences while also being edgy enough to appeal to older audiences. The new comedic adventure also has a lot of heart going for it, mainly due to the charismatic performances from stars Julian Dennison and Sam Neill but also courtesy of a story that promotes friendship and teamwork. It is quite the quirky comedy that earns its fair share of laughs, thrills and emotion from those who decide to go on the run with this dynamic duo. (3 Stars)