‘Journey’ is delectable, ‘Storm’ is riveting’ and ‘Step Up’ is exhilarating 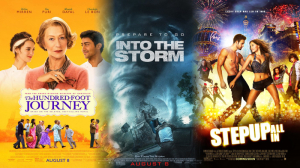 Among the new movies that were released Friday, Aug. 8 are a feel-good food dramedy from the director of “Chocolat,” a found-footage flick that takes moviegoers into the storm and the latest installment in the “Step Up” franchise.

There are only so many things that one can do with a reunion tale therefore you will undoubtedly recognize a lot of the themes contained within writer/director Jesse Zwick’s new ensemble dramedy “About Alex.” However, the question then becomes about whether or not it is done well. And anybody who has an eclectic group of friends will tell you that Zwick’s flick hits all of the right notes, with amusing wit, profound emotional resonance and a truly incredible cast that – if you did not know any better – could be playing the various people in your own knotty social circle. (Thumbs Up!)

Brendan Gleeson plays a good-natured priest who, after he is threatened during a confession, must battle the dark forces closing in around him. (R – 100 minutes)

Brendan Gleeson gives an absolutely superb performance in “Calvary.” However, the story – which consists of a series of very verbose scenes during which Gleeson’s character interacts with the many mean-spirited members of his church before eventually arriving at an inevitable conclusion – leaves a lot to be desired. There appears to be some sort of significance to it all – a message about faith if you will – but the likelihood of said significance going over your head is quite high while the movie disseminates nothing more than dismay when all is said and done. (Thumbs Down!)

Scott Haze plays a dispossessed and violent man whose life is a disastrous attempt to exist outside the social order. Successively deprived of parents and homes and with few other ties, he descends to the level of a cave dweller as he falls deeper into crime and degradation. (R – 104 minutes)

Without having read Cormac McCarthy’s source material on which writer/director James Franco’s new thriller “Child of God” is based, one cannot be certain as to whether the movie’s lack of a consistent narrative is an inherent problem or a newly invented one. Either way, its erraticism encourages temporary ADHD and its uneventful ending reduces resonance. Having said that, star Scott Haze’s performance is so insanely tormented that it in and of itself carries the flick and its themes of loneliness and isolation. Often the only actor on the screen, Haze forcefully creates a character that has our sympathy despite doing absolutely nothing to deserve it. (Thumbs Up!)

Helen Mirren plays the proprietress of a celebrated French restaurant who clashes with the members of an Indian family after they open their own eatery literally 100 feet across the street. However, undeniable chemistry eventually causes her to take one of the members – gifted young chef (Manish Dayal) – under her wing. (PG – 122 minutes)

“The Hundred-Foot Journey” is director Lasse Hallström’s closest endeavor to his grandest achievement “Chocolat” – which debuted 14 years and 10 movies ago. After all, both films feature tales of outsiders attempting to open food-related establishments in towns that are less than welcoming – and that’s an understatement. But the similarities go a bit deeper as well with the new dramedy essentially epitomizing the term “feel-good flick.” It is difficult to determine what is more delectable – the exceptionally charming story that warms your heart or the luscious looking cuisine that makes your mouth water. Either way, pair this one with “Chocolat” for a delightful at-home dessert. (Thumbs Up!)

Storm trackers, thrill-seekers, and everyday townspeople document an unprecedented onslaught of tornadoes touching down in the town of Silverton. (PG-13 – 89 minutes)

“Into the Storm” does precisely what the title states. It takes moviegoers into the, well, storm. Granted, it is not a real storm; but it very well may be as the new found-footage flick serves as one hell of a special effects demo reel. In other words, the sights and sounds are sincerely spine-tingling. However, the cardboard-thin characters and dippy dialogue make the inevitable downtime between tornado touchdowns feel a bit barren. Still, it is impossible to avoid getting sucked into and swept away by its exciting entertainment value. This is not a movie; it is a riveting roller-coaster ride. (Thumbs Up!)

Briana Evigan and Ryan Guzman play a pair of dancers who come together in glittering Las Vegas to battle for a victory that could define their dreams and their careers. (PG-13 – 112 minutes)

With “Step Up: All In,” the popular dance flick franchise appears to have finally hit its stride. After three sequels that – while mesmerizing – were merely variations on the theme of two dancers from different worlds coming together as set forth 8 years ago in the movie that introduced us to the man who would become Magic Mike, the latest installment brings back some of the series’ most memorable characters to tell a story about the struggles one goes through while trying to convert their passion into a career. It is a particularly poignant and completely charismatic tale that, of course, also treats us to some sensationally exhilarating dance sequences. (Thumbs Up!)