Among the new movies that were released Friday, May 20 are an odd dramedy starring Colin Farrell and an old-fashioned noir starring Adrien Brody. 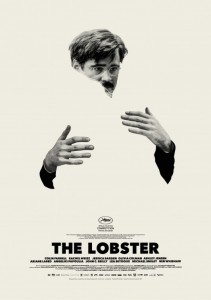 Colin Farrell plays a single man who, in a dystopian near future, is taken to a hotel where he is obliged to find a romantic partner in 45 days or be transformed into a beast and sent off into the woods. (R – 118 minutes)

“The Lobster” is bizarre beyond words. On the outside, its strangeness may be a bit daunting. But once you crack its shell and sink your teeth into its hilariously eccentric meat you will be hooked, unable to turn away from the freaky fairy tale unfolding before your eyes. You are bound to be at least a bit disturbed by writer/director Yorgos Lanthimos’s new dramedy but you are also likely to laugh out loud a lot at the outlandish occurrences and dry dialogue delivery. It is also thoroughly thought-provoking, posing intellectually and emotionally challenging questions about romantic conformity. (4 Stars) 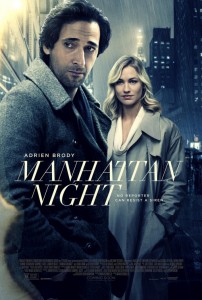 Adrien Brody plays a New York City tabloid writer with an appetite for scandal who is drawn into a very nasty case of sexual obsession and blackmail – one that threatens his job, his marriage and his life. Yvonne Strahovski also stars. (R – 113 minutes)

“Manhattan Night” is an old-fashioned noir that may please people who have been longing for a new slow-burning, atmospheric private eye flick but bore most everyone else. Writer/director Brian DeCubellis skillfully adapts Colin Harrison’s novel in an authentic way that evokes cinema’s golden era. Unfortunately, the story is lackluster, absent of significant surprises or the thrills required to keep viewers interested and engaged. Eventually, the only thing that prevents one from completely giving up on the movie before the no-longer-alluring mystery is solved is star Adrien Brody’s veritable performance. No other living actor could more credibly portray this character. (1 Star)