Among the new movies that were released Friday, Feb. 27 are an ensemble drama from director David Cronenberg, a Columbia-based thriller starring Julia Stiles and Scott Speedman and a mockumentary about vampires.

‘Maps to the Stars’ 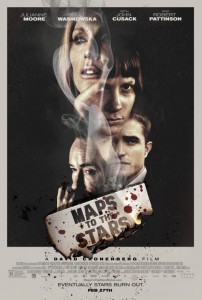 Julianne Moore, Mia Wasikowska, John Cusack and Robert Pattinson play people chasing celebrity, one another and the ghosts of their pasts. (R – 112 minutes)

Director David Cronenberg continues his streak of making the absolute worst movies imaginable with “Maps to the Stars.” The new ensemble drama is a disgusting piece of cinematic bile, consisting of little more than distasteful dialogue and sickening situations – none of which adds up to anything even remotely coherent much less meaningful. Besides wasting the audience’s time, Cronenberg also wastes a great deal of talent here, reducing Julianne Moore to something akin to a whiny toddler and pigeon-holing Robert Pattinson into the same soulless character he played in the filmmaker’s previous catastrophe “Cosmopolis.” (Thumbs Down!)

‘Out of the Dark’ 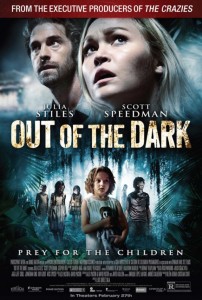 Julia Stiles and Scott Speedman play parents whose new life in Columbia turns from promising to terrifying when they are forced to confront ancient legends, ghosts and a haunting family secret. (R – 92 minutes)

“Out of the Dark” gets points for at least doing something different than most horror flicks that are released nowadays but that still is not enough to make the experience worth attempting to endure. Granted, the new thriller has got a handful of sufficient startles but even the best jump-scare only gets you so far – especially when the story is as slow-moving as this. Stars Julia Stiles and Scott Speedman’s emotional performances suggest they believe – or at least want to believe – they are in a better motion picture but, unfortunately, there really are not enough chills here to sustain a viewer’s interest. (Thumbs Down!)

‘What We Do in the Shadows’ 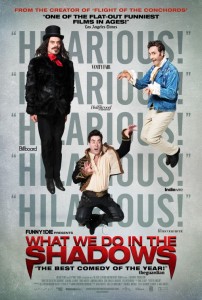 Jemaine Clement, Taika Waititi, Jonathan Brugh and Ben Fransham play vampire roommates trying to get by in a modern world that’s not always hospitable to the undead. (NR – 86 minutes)

There is really very little satirical bite to “What We Do in the Shadows,” making for a movie that may be momentarily amusing but ultimately not something into which audiences can really sink their teeth. Granted, Jemaine Clement and Taika Waititi’s new comedy is not to be taken too seriously but one would think that the “Flight of the Conchords” duo would have been able to come up with jokes that aim a bit higher than the junior high crowd. Making matters worse, Ben Fransham’s character – who is a dead-ringer for Nosferatu – is criminally underused, hidden in the shadows while the film’s far campier elements reminiscent of an over-the-top “Saturday Night Live” skit get the spotlight. (Thumbs Down!)