‘Me Before You’ breaks hearts, ‘Popstar’ annoys and ‘Turtles’ boggles brain

Among the new movies that were released Friday, June 3 are a romantic drama starring Emilia Clarke and Sam Claflin, a comedic mockumentary starring Andy Samberg and an actioner sequel starring four computer-generated turtles. 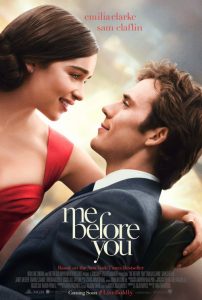 Emilia Clarke plays a contented small town Englishwoman who enters into an unexpected relationship with a wealthy, recently-paralyzed Londoner (Sam Claflin) who hires her as his caretaker. (PG-13 – 110 minutes)

“Me Before You” will not only make you cry in the moment harder than any other movie this year but will also cause you emotional distress for several days thereafter. The new romantic drama adapted from Jojo Moyes’ novel will simultaneously break and mend your heart. Stars Emilia Clarke and Sam Claflin have remarkable chemistry with one another while also authentically depicting their individual characters’ heartache. The entire film is a fantastic affair that will move you beyond words but Clarke’s expressive performance amplifies the effect to levels rarely achieved in modern day motion pictures. (5 Stars) 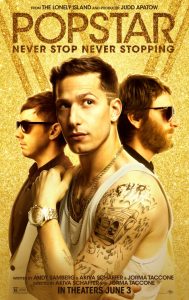 Andy Samberg plays a singer/rapper who faces a crisis of popularity after his sophomore album flops, leaving his fans, sycophants and rivals all wondering what to do when he’s no longer the dopest star of all. (R – 87 minutes)

Any one of Andy Samberg’s Lonely Island digital shorts on “Saturday Night Live” is better than “Popstar: Never Stop Never Stopping.” That is not to say that new new comedic mockumentary lacks laughs because there it does possess its fair share of funny moments. But while the smaller jokes work, the larger joke wears thin as Samberg and company desperately try to stretch what should have been a series of digital shorts into a feature-length film. To make matters worse, the songs on its soundtrack are not the least bit catchy much less memorable. In fact, they are actually annoying. (2 Stars)

‘Teenage Mutant Ninja Turtles: Out of the Shadows’ 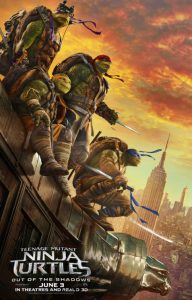 As Shredder joins forces with mad scientist Baxter Stockman and henchmen Bebop and Rocksteady to take over the world, the Turtles must confront an even greater nemesis: the notorious Krang. (PG-13 – 112 minutes)

“Teenage Mutant Ninja Turtles” is nothing but noisy nonsense. The new sequel to the 2014 reboot of the classic franchise is a large step down from what was already a pitiful launch. The human characters – portrayed by Megan Fox, Will Arnett and Stephen Amell – provide some decently grounded scenes early on but the computer-generated creatures quickly take over the screen with all-consuming action that boggles the brain. Bebop and Rocksteady are fantastic fun but before long the flick feels more like a big screen, balls-to-the-wall edition of “Mighty Morphin’ Power Rangers” than an update to a cherished childhood memory. (2 Stars)