Among the new movies that were released Friday, July 10 are a spinoff/prequel to “Despicable Me,” a drama set during a dust storm and a creature feature about a bunch of giant killer wasps. 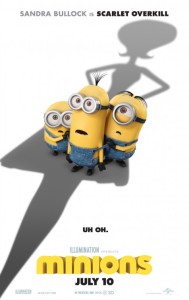 Minions Stuart, Kevin and Bob are recruited by supervillain Scarlet Overkill (Sandra Bullock) who, alongside her inventor husband Herb (Jon Hamm), hatches a plot to take over the world. (PG – 91 minutes)

“Minions” is all superficial laughs and no underlying substance. But there is absolutely nothing wrong with that, as anyone who has ever been entertained by a “Roadrunner and Wile. E. Coyote” or “Tom and Jerry” cartoon will tell you. Granted, there is a world of difference between the new spinoff/prequel to Illumination’s “Despicable Me” and Pixar’s “Inside Out” but there is undoubtedly a case for both animated adventures’ existence. What it lacks in significance it more than makes up for in silliness thereby producing a delightfully diverting hour and a half for audiences of all ages. (Thumbs Up!)

Nicole Kidman and Joseph Fiennes play parents who are thrown into crisis when they discover that their son and daughter have mysteriously disappeared just before a massive dust storm hits their remote Australian desert town. Hugo Weaving also stars. (R – 112 minutes)

Much like the two kids in it, “Strangerland’s” narrative disappears in a massive dust storm – or at least gets a little lost and fails to ever find its way back on track. It is exceptionally easy to fall asleep while watching the new drama as it sort of stumbles around, unsure of precisely what it wants to be or what it wishes to say. Instead of focusing on the mystery surrounding where those two aforementioned kids have disappeared to, it fixates on the parents’ suffering. Ambiguous anguish is neither entertaining nor satisfying and is instead simply frustrating. (Thumbs Down!) 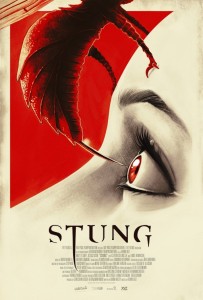 “Stung” is stuck in between serious sci-fi and comedic horror. It is not tongue-in-cheek enough to be “Zombeavers” yet it is not sincere enough to be “Backcountry.” As such, it is neither scary enough nor silly enough to warrant a watch, instead posing as nothing more than an impressive effects reel with a combination of computer-generated and practical elements that efficiently facilitate suspension of disbelief. Moreover, its characters are not likeable enough nor unique enough to earn our empathy or support. There is a certain promise of fun that comes with seeing a film that features giant killer wasps. Unfortunately, that promise is broken here – and that stings. (Thumbs Down!)