‘Money Monster’ is verbose, ‘Search Party’ is silly and ‘Sundown’ is insane

Among the new movies that were released Friday, May 13 are a hostage thriller starring George Clooney and a pair of action-packed comedies set on the other side of the border. 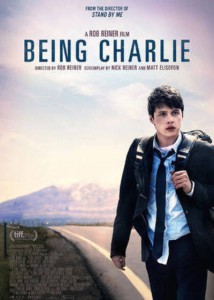 Nick Robinson plays a young man whose father, a former film star currently running for Governor of California, has staged an intervention with the goal of forcing him to address – and, hopefully, conquer – his substance abuse issues. He reluctantly enters a new adult facility where his budding romance with a kindred spirit (Morgan Saylor) looks like it might be an antidote to his strained relationship with a highly preoccupied father and overly indulgent mother. (NR – 97 minutes)

“Being Charlie” appears to have been made with plenty of passion, good intentions and heartfelt exploration into the thought processes of an addict but it fails to resonate with viewers due to its insistence that we feel empathy for a character that is incredibly undeserving of it. Director Rob Reiner paints the new drama’s protagonist in a way that suggests that he is incapable of taking responsibility for his own actions. Yet Reiner implies we should sympathize with his suffering nonetheless. We are initially intrigued by the character study but quickly disengage when its depthlessness is discovered. (2 Stars) 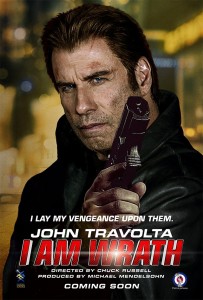 John Travolta plays a former Black Ops agent who witnessed his wife’s death at the hands of a street gang. When corrupt cops let the prime suspect walk, he takes the law into his own hands. Joined by a former comrade-in-arms (Christopher Meloni), he uncovers a conspiracy that leads to the upper ranks of government. (NR – 92 minutes)

As far as revenge thrillers go, “I Am Wrath” is a far cry from “Taken” but it certainly still entertains nonetheless. Star John Travolta gives a believable and commanding performance in the film, which is at its best when it is dripping with raw emotion or shifting itself into hi-octane action mode. However, there exists a tonal imbalance with an occasional attempt at humor that was perhaps intended to diffuse tension but instead undermines the story’s intensity. Co-star Christopher Meloni is initially tied to these comedic moments and his character is therefore at first unwelcome before eventually revealing himself to have been indispensable. (3 Stars) 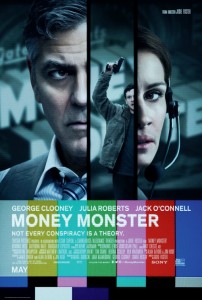 George Clooney plays a bombastic TV personality whose popular financial network show has made him the money wiz of Wall Street. But after he hawks a high tech stock that mysteriously crashes, an irate investor (Jack O’Connell) takes him, his crew and his ace producer (Julia Roberts) hostage live on air. They must then find a way to keep themselves alive while simultaneously uncovering the truth behind a tangle of big money lies. (R – 90 minutes)

“Money Monster” has a stellar cast and a potentially captivating real-time gimmick but, unfortunately, it spends so much time spinning its wheels and spouting out nonsense that all of its positive attributes fall by the wayside. The new hostage thriller is uncommonly verbose, leaving viewers feeling dumbfounded as the story’s specifics fly straight over their heads. Moreover, it completely misses a prime opportunity to make hard-hitting social commentary. Some slightly comedic moments are also ill-suited for such a seriously plotted motion picture. But at least its actors give great performances – especially Jack O’Connell. (2 Stars) 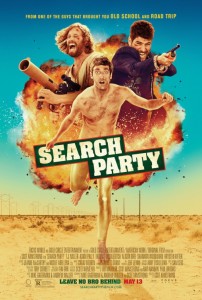 Thomas Middleditch plays a man who travels to Mexico in an effort to win back his girlfriend after his friends (Adam Pally and T.J. Miller) ruin his wedding. However, when he is carjacked and left naked, said friends set out in search of him but get side-tracked several times along the way. (R – 93 minutes)

Look no further – the year’s funniest comedy so far has arrived. “Search Party” is a nonstop, pedal-on-the-gas and balls-to-the-wall laugh riot. Some may write the film off as a steaming pile of nonsense but others will appreciate its insane silliness. Viewers are taken on a ridiculously wild ride to Mexico that comes complete with plenty of side-splitting pit-stops along the way to a hilariously harebrained final act. Its uniquely outrageous (and often offensive) sense of humor is certainly not for everybody but those with a flexible funny-bone will love every minute of the absurd debauchery. (4 Stars) 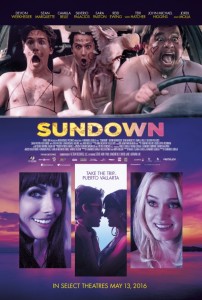 Devon Werkheiser and Sean Marquette play high school seniors who sneak off to Puerto Vallarta during spring break while their parents are out of town, hoping to party with a high school crush (Sara Paxton). Once there, they meet a mysterious local beauty (Camilla Belle) who they believe steals a priceless family heirloom that then falls into the hands of a dangerous gangster. (R – 103 minutes)

“Sundown” has great energy, strong passion and – best of all – big laughs. The new action-packed romantic comedy is tremendously fun from beginning to end as it takes viewers on vacation to a beautiful-yet-chaotic Puerto Vallarta. Each insane situation leads to an even wackier one in rapid succession, resulting in enormous entertainment value. However, it is the film’s heart that sets it apart as well as its love of music as it features special appearances from the several of the world’s top DJs including Steve Aoki, Paul Oakenfold, Chris Lake and Adrian Lux. (3 Stars) 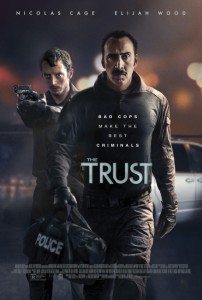 Nicolas Cage and Elijah Wood play police officers who follow a trail that leads directly to a custom bank-style vault built into the back room freezer of a small grocery store. They put a plan into motion to rob the vault and split whatever they find inside. But by the time they figure out what the vault contains, it is already too late to turn back. (R – 93 minutes)

Directors Alex and Benjamin Brewer must have known that all you have to do to make a great movie is put actors Nicolas Cage and Elijah Wood in a room together and give them some meaty characters to chew on. That is essentially the formula for “The Trust,” a new thriller in which the two stars portray corrupt cops who attempt to pull off the perfect heist. Cage is crazy good as someone with no conscience whatsoever while Wood is an ideal foil as he struggles with the morality – and potentially dangerous consequences – of their actions. (4 Stars)