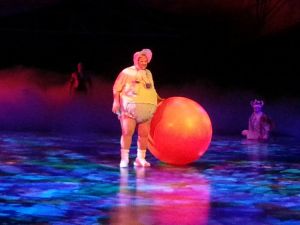 Other than gambling, Vegas is known for incredible shows.  Superstars take up residence….Vegas Icons like Elvis, Celine, Britney, and Siegfried & Roy each have their unique draw.  Another such staple is Cirque du Soleil.  The Canadian phenome is now synonymous with Vegas.  This not so subtle creative takeover started with Mystere.  When Treasure Island was being built by Steve Wynn he contracted with Cirque to introduce Vegas to their creative, innovative, elegant and unique style of circus show.  A state of the art theater was built specifically for Mystere.  This was a Vegas first as well—others had to make the show fit the venue.  There truly is not a bad seat in the house for this show.  Whether you are in the front row or in the very last row in the back you are in a great seat with a great view.  Over the years Cirque’s presence in Vegas has grown to now 8 shows on the strip (O, Love, Ka, Zumanity, Criss Angel Believe, Michael Jackson One, Zarkana & Mystere).

From the minute you enter the theater you are enveloped in entertainment and fun.  Your usher may be a clown in disguise—no one is immune to his arsenal of comedic pranks as he moves throughout the theater wreaking havoc and mayhem.  Mystere’s theme is the mystery of life in its beginning stages (how apropos as it was the inception of the Cirque dynasty in Vegas).  As the preshow makes its way to the stage it imperceptibly becomes the show itself as we are introduced to Le Bebe Francois and his big red bouncy ball.  This super-sized baby, played masterfully by R.J. Owens, is a recurring thread throughout the entire show that give us a comedic constant amid the sometimes frenetic flurry of activity on stage.  His childish antics as he goofs around are sooooo much fun to watch.  When he finds himself in trouble or a tenuous situation he reaches out to….his “Papa” or “Mama” in the audience for rescue.  This unsuspecting audience member becomes another recurring character as Le Bebe carries on in his ego-centric infantile way that inevitably lands him in funny situations requiring parental assistance.  Le Bebe’s unscripted interactions with this audience member add fresh, unique fun nightly.

During Mystere, the acts and scenery morph seamlessly.  The stage is ever changing as various parts rise, drop, rotate, appear and disappear.  Despite multiple acts requiring apparatus to be put in place, there is never a break in the action.  While they are securing the trapeze, trampolines or multiple Chinese poles into place, your attention is on some other part of the stage and the transition just “happens” without your conscious noticing.  A person can watch this show multiple times and notice something new each and every time.  This “too much to take in at one time” aspect in conjunction with the unscripted audience participation  and Cirque’s “tweaking” of the show’s acts add to Mystere’s longevity and continued popularity.

It seems that over the years each new Cirque show has gotten more elaborate and technically intricate and innovative which is great, but I believe there is much to be said for the manner in which Mystere stays true to its circus roots.  This show is anything but predictable and is uniquely intricate.  One of the first acts we see is huge Taiko drums and drummers suspended and moving all along the ceiling performing their powerful rhythm in midair.  The largest drum in Mystère is the ōdaiko, which is 6 feet (1.8 m) in diameter and 15 feet (4.6 m) in length, and weighs half a ton.  Since this drum is sooo huge, it was brought in during construction and cannot be removed without destroying it since there is no opening large enough to accommodate its great size (Keene, Jarret (2011). “Drumline”. Inside Cirque du Soleil. Fall 2011: 18–19). The Hand to hand balancing act performed by two brothers while atop a rotating dome center stage is nothing short of amazing–Their strength, flexibility and grace are incredible to behold.  There are double faced gymnasts working the Chinese poles with such dexterity they just seem to float and fly across from pole to pole with ease and they defy gravity stopping their downward slide just short of smashing head first into the floor.  In addition to the staple acts of the high flying trapeze, trampolines, bungee, Korean plank and tumbling acts that Cirque is known for, this show has an Aerial cube act as well.  All the acts are performed by some of the best performers in the industry.  Another phenomenal act is the Aerial tissu solo act added to the show in January, 2012.  What sets this act apart from anything I’ve ever seen is that the aerialist appears to never run out of fabric!  She suspends herself in contortionist poses and spins and flips showing incredible flexibility continuously without ever having to reposition herself!  The system that allows this illusion of never-ending fabric was created by the aerial artist herself, Ginger Ana Griep-Ruiz.

In addition to the incredible acts, the stage is on fire with the creative and colorful costumes and makeup that Cirque is known for.  Whether the huge rainbow snail that grows throughout the show, the red “fire” bird, the lizards, or the huge number of Spermatos and Spermatites on stage, Cirque’s creativity abounds.  Last but not least I must call attention to the beautiful ethereal music that accompanies the action on stage–It is performed live each night!  The vocals are so perfect one would expect it was recorded were it not for the fact you can see her singing off to the side of the stage perched above the action.  This level of showmanship is what we have come to expect of a Cirque show and Mystere does not disappoint.  Mystere is a “must see” on your next trip to Las Vegas!

Tricia utilizes her many talents for Breakthrough Thinking Broadcasting Network as she splits her time between writing, producing and being an on air personalty for Breakthrough Entertainment. In addition,she provides support for Breakthrough Sports through interviewing, photographing and editing material both for articles and on air information. She is also part of the National team that travels and helps in the interview process at key National events such as the Kentucky Derby, Las Vegas show reviews, celebrity social gatherings and other entertainment and sports events. She has traveled extensively throughout the world.