‘Night Out’ is fun, ‘Neighbors’ hazes with hilarity and ‘Wedding’ goes wild 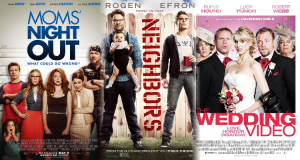 Among the new movies that were released Friday, May 9 are a comedy about parenting just in the knick of time for Mother’s Day, a comedy in which Seth Rogen and Zac Efron play feuding neighbors and a found-footage comedy about one wild wedding.

Sarah Drew plays one of several moms who entrust their children to their husbands for a few hours so that they can have a much-deserved grown-up evening of dinner and conversation only to discover that everything goes horribly wrong as a result. (PG – 98 minutes)

“Moms’ Night Out” may be the most entertaining faith-based flick you will ever see, drawing viewers in with a lot of laughs while dispensing a very admirable message about how one does not need to be a perfect parent in order to be a remarkable role model. Best of all, save for a single scene near the end where all of the religious weight is concentrated, the majority of the new movie is much more interested in affording audiences of all ages a rollickingly fun time than preaching to them and instead allows the significance of this side-splitting story to be brought out organically. (Breakthrough!)

Seth Rogen and Rose Byrne play a couple with a newborn baby who face unexpected difficulties after they are forced to live next to a fraternity house. Zac Efron also stars. (R – 96 minutes)

“Neighbors” is like a friend who does not have very good judgement as to how far he or she can take a joke. Most of the time, the new comedy hits its target and extracts uproarious laughter from its audience. However, occasionally, it goes way too far and does something that will make most moviegoers roll their eyes and others feel compelled to walk out. Fortunately, though, if you can survive a little stupidity here and there and are unopposed to its smutty sense of humor, stars Seth Rogen and Zac Efron will haze you with hilarity. (Thumbs Up!)

Tom Hiddleston plays a depressed musician who reunites with his lover (Tilda Swinton). However, their romance – which has already endured several centuries – is disrupted by the arrival of her uncontrollable younger sister (Mia Wasikowska). (R – 123 minutes)

You know that there is a problem with your motion picture when the appearance of a character who is supposed to come off as unwelcome is actually the only thing that pumps a little life into it. Independent filmmaker Jim Jarmusch may have wanted “Only Lovers Left Alive” to be his artistic answer to the “Twilight” phenomenon but it is really just a cinematic sleeping pill. The romantic drama’s sloth-like story contains little more than stars Tom Hiddleston and Tilda Swinton sipping blood as the plot progresses to a very unimpressive conclusion. (Thumbs Down!)

Lucy Punch and Robert Webb play a newly married couple whose best man (Rufus Hound) decides to capture their wedding on video and present them with it as a gift. (NR – 94 minutes)

“The Wedding Video” could have been a laugh riot had it remained relatively plotless and focused on the quirky characters that come together from separate families when two people take one another’s hands in holy matrimony rather than simply being your typical romantic comedy fashioned as a found-footage flick. Aside from cliched predictability, the handheld/homegrown concept is not even fully realized as the best man’s first-hand point-of-view is eventually replaced with your run-of-the-mill omnipresent production. And the unearned happily-ever-after ending is silly even by the low standards set by the cheesiest of rom-coms. (Thumbs Down!)