Among the new movies that were released Friday, Aug. 28 are a thriller set in Southeast Asia, an 80’s themed sci-fi actioner and a political drama that delves into some dark places. 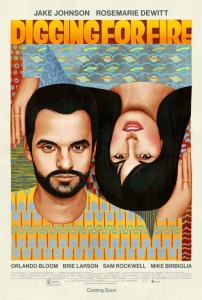 Jake Johnson and Rosemarie DeWitt play a married couple whose chance to stay at a fancy home in the Hollywood Hills is complicated by a discovery of a bone and a rusty old gun in the yard. A disagreement about it sends them on separate and unexpected adventures over the course of one weekend. (R – 85 minutes)

Writer/director Joe Swanberg keeps making the same movie. And, unfortunately, it is not a very good one. Whether it goes by the title “Drinking Buddies,” “Happy Christmas” or – most recently – “Digging for Fire,” the story always revolves around a group of not-particularly-likeable people talking incessantly about not-particularly-meaningful things. The initial setup is at least more intriguing this time around but it is quickly placed on the backburner in favor of tedious rambling. And when the plot’s promise finally materializes, it is buried back up again as though it never even mattered to begin with. (Thumbs Down!) 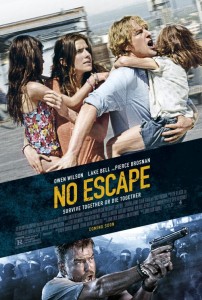 Owen Wilson plays an American businessman who settles into his new home in Southeast Asia with his wife (Lake Bell) and two daughters. Suddenly finding themselves in the middle of a violent political uprising, they must frantically look for a safe escape as rebels mercilessly attack the city. Pierce Brosnan also stars. (R – 101 minutes)

“No Escape” is incredibly intense, terrifying viewers into canceling any plans they may have had to travel abroad. After all, there is enough chaos to deal with right here at home without having to worry about deciphering a different language or comprehending another culture in the midst of cataclysmic circumstances. The new thriller is a relentless, edge-of-your-seat ride through some of the most unbearable suspense imaginable, leaving your nerves frayed beyond repair. Granted, there are some moments that are a bit unbelievable but the excitement offsets that and makes this one of the most electrifying movies of the year. (Breakthrough!) 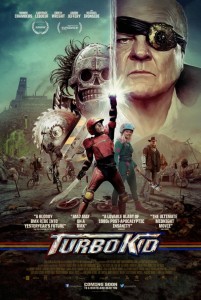 Munro Chambers plays an orphaned teenager who, in a post apocalyptic 1997, goes on an adventure to save his female-robot companion (Laurence Leboeuf) from the hands of an evil warlord (Michael Ironside) who controls the only water supply. (NR – 90 minutes)

“Turbo Kid” looks – and feels – as though it could be a digitally-restored version of an 80’s sci-fi actioner that had been locked up in some time capsule somewhere. That is perhaps the greatest compliment the new movie could receive as it aims to authentically mimic – or perhaps more accurately resurrect – the flicks from 35 years ago. As a result, audiences of a certain age will experience a gleeful nostalgia as they enjoy a blast from their past albeit with a bit more gore. Star Munro Chambers is excellent as an unlikely-yet-eager hero while Laurence Leboeuf is as beautiful as she is bubbly and the production itself is amusingly retro. (Thumbs Up!) 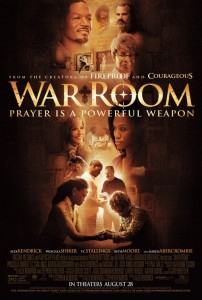 Priscilla Evans Shirer plays a woman who is challenged by another woman (Karen Abercrombie) to establish a battle plan of prayer for her family, whose world is crumbling under the strain of a failing marriage. As she tries to fight for her family, her husband’s (T.C. Stallings) hidden struggles come to light and he must decide if he will make amends to his family and prove the woman’s wisdom that victories don’t come by accident. (PG – 120 minutes)

It is understandable that filmmakers Alex and Stephen Kendrick aim to make movies that are targeted at a specific audience – namely devout Christians. But there is some benefit in being a little less heavy-handed and making a movie whose message is wider-reaching. “War Room” is the first of their films, following “Fireproof” and “Courageous,” that said concept is completely discarded in favor of an annoyingly narrow approach. Although the marital melodrama is occasionally compelling, the incessant and forcible pulpit-pounding alienates general audiences, appealing purely to people whose entire worldview is locked up in a prayer closet. (Thumbs Down!)

Margot Robbie plays a young woman who, in the wake of a nuclear war, survives on her own, fearing she may actually be the proverbial last woman on earth until she discovers the most astonishing sight of her life – another human being (Chiwetel Ejiofor). A fragile, imperative strand of trust connects them. But when a stranger (Chris Pine) enters the valley, their precarious bond begins to unravel. (PG-13 – 95 minutes)

“Z for Zachariah” would have been more accurately titled “Z for Prosaic” – which makes precisely as much sense as the movie itself. The new post-apocalyptic drama moves at a snail’s pace, which is not particularly a bad thing so long as there is at least some suspense or tension to fill the pregnant pauses. Unfortunately, the new flick has about as much suspense and tension in it as the love triangle it portrays has passion – which is none at all. The fact that it was directed by Craig Zobel, the filmmaker behind 2012’s super-stimulating “Compliance,” is truly devastating. (Thumbs Down!) 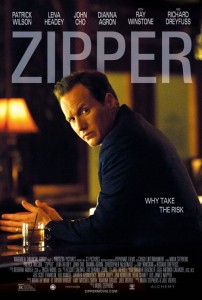 Patrick Wilson plays a family man who has it all until he risks losing everything due to his inability to fight off his obsessive temptation for other women. Lena Headey, John Cho, Dianna Agron, Ray Winstone and Richard Dreyfuss also star. (R – 103 minutes)

You know that “Zipper” succeeds in its efforts because of your reaction to its final few moments. You are guaranteed to be a bit emotionally distraught, demonstrating that writer/director Mora Stephens has drawn you into the drama. However, perhaps more importantly, it also shows how well she has humanized a character whose actions are disappointing – to say the least – and merely a reflection of many real-life politicians and other individuals who we hold to a higher standard. The cast’s performances are incredible, especially that of star Patrick Wilson, delving into some dark places to shine new light on a surprisingly complex situation. (Thumbs Up!)