Among the new movies that were released Friday, July 24 are an action-packed comedy that brings video games to life and a dramedy about two women who bond over their unexpected pregnancies. 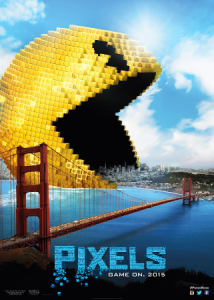 Adam Sandler, Kevin James, Josh Gad and Peter Dinklage play former arcaders who must save the world from intergalactic aliens that have discovered video feeds of classic video games and misinterpreted them as a declaration of war. Michelle Monaghan also stars. (PG-13 – 106 minutes)

At times, “Pixels” plays out like just another Adam Sandler and/or Kevin James movie – which, as anyone who has seen “Grown Ups” or “Paul Blart: Mall Cop 2” can tell you, is definitely not a good thing. Its characters are incredibly annoying – especially the ones played by Josh Gad and Peter Dinklage – its humor is dim-witted and its story elements are absurd. But then the new action-packed comedy’s enjoyable nostalgia begins to change the color of the glasses of viewers who were around in the 80’s while its diverting creativity converts everyone else with the Pac-Man chase alone being well-worth the price of admission. (Thumbs Up!) 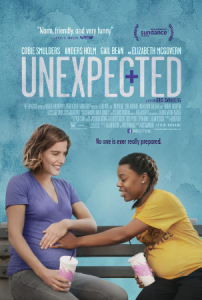 Cobie Smulders play an inner-city high school teacher who discovers she is pregnant at the same time as one of her most promising students (Gail Bean) and the two develop an unlikely friendship while struggling to navigate their unexpected pregnancies. (R – 90 minutes)

“Unexpected” may sound like it is a movie that is exclusively for female viewers but writer/director Kris Swanberg successfully extends the new dramedy’s themes of accepting life’s unexpected occurrences and appreciating mutually supportive relationships to a universal level from which audiences of all ages and sexes will derive significance. Star Cobie Smulders sparkles in a role that is quite different from those with which she is typically associated. The narrative ends a bit too abruptly though, thereby leaving the third act feeling incomplete. Still, the story’s sincerity and sunny implications shine through for an enjoyable and meaningful experience. (Thumbs Up!)