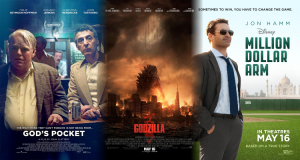 Among the new movies that were released Friday, May 16 are a drama starring the late Philip Seymour Hoffman, an update on a 60-year-old monster movie franchise and a new entry in the Disney sports movie canon.

Dan Fogler plays an unemployed stoner who suffers a midlife crisis over his upcoming wedding. Fueled by vivid apocalyptic dreams, he becomes obsessed with Doomsday theories and decides to make a documentary on the subject while his fiancé is busy planning their wedding. (NR – 98 minutes)

Say what you will about those folks who parade the streets with signs warning us that the end is nigh but they may actually know what they are talking about. After all, what other logical explanation than an approaching apocalypse is there for Anne Hathaway, Jay Baruchel, Josh Duhamel and Topher Grace agreeing to appear in “Don Peyote?” The new drug-trip comedy – which was written/directed by star/narrator Dan Fogler – looks more like an amateurish home video than a legitimate feature film. It is nothing more than an annoying exercise in self-indulgence – asininity at its absolute worst. (Thumbs Down!)

Philip Seymour Hoffman plays a man whose stepson is killed in a construction “accident.” When a local columnist comes sniffing around for the truth, things go from bad to worse and he finds himself stuck in a life-and-death struggle compounded by a body he can’t bury, a wife he can’t please and a debt he can’t pay. (NR – 88 minutes)

One may wish that “God’s Pocket” – exhibiting one of Philip Seymour Hoffman’s final performances – was a remarkable motion picture so that the late actor could have at least left this earth on a high note. Unfortunately, that is not even close to the case thanks to a story that is too meager to sustain even a modest runtime and an excessively inconsistent tone. Granted, writer/director John Slattery captures this peculiar community quite vividly but you never feel like more than a mere observer. Meanwhile, the movie never makes it clear as to whether we should pity these characters or find amusement in their ineptitude. (Thumbs Down!)

The world’s most famous monster is pitted against malevolent creatures who, bolstered by humanity’s scientific arrogance, threaten our very existence. (PG-13 – 123 minutes)

“Godzilla” is the penultimate summer blockbuster – once its characters finally stop their incessant yammering. That is to say that the new monster movie – an update on the now 60-year-old franchise – delivers a thrilling time at the movie theater throughout its 30-minute grand finale during which very little dialogue is spoken as its story is relayed via visually spectacular action sequences and expressive performances. However, it is a somewhat tedious journey to that point in the motion picture as the film’s human characters loquaciously speculate the impending state of emergency. (Thumbs Up!)

“Million Dollar Arm” is a spectacularly solid entry in Disney’s sports movie canon – one with remarkably wide appeal thanks primarily to its focus being more on the heart of its incredibly inspirational story than on the sport. Moreover, it takes a look at a tale that can be told in such a way that does not follow the genre’s often all-too-predictable path while also treating us to a brief-yet-beautiful vacation in India before bringing us back to the United States where its fish-out-of-water chronicle can have an impact that is as amusing as it is charming. Consider it a crowd-pleasing home run – or whatever the cricket equivalent of that is. (Thumbs Up!)