Among the new movies that were released Friday, July 31 are the fifth installment in the “Mission: Impossible” film franchise, a dramatic thriller based on actual events and a sequel that re-visits the Griswold family for a new generation. 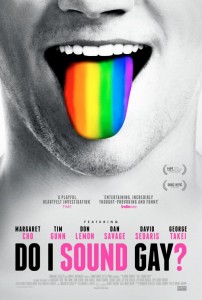 Filmmaker David Thorpe embarks on a journey of self-discovery, confronting his anxiety about “sounding gay.” Enlisting acting coaches, linguists, friends, family, total strangers and celebrities, he quickly learns that many people – both gay and straight – often wish for a different voice. (NR – 78 minutes)

“Do I Sound Gay?” is an entertaining exploration into an intriguing topic. Filmmaker David Thorpe uses personal experience to drive his investigation thereby making the new documentary feel both intimate and sincere. Having said that, he barely scratches the surface of the subject, often falling short of asking bigger questions or delivering deeper conclusions. Even his attempt to universalize his inquisition is only lightly touched upon. Still, the subject is dealt with such affection and humor that you cannot help but be interested in and moved by Thorpe’s discoveries, small as they may be. (Thumbs Up!) 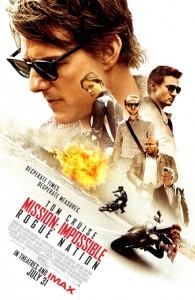 Tom Cruise reprises his role as Ethan Hunt who, with the IMF disbanded, now faces off against a network of highly skilled special agents hellbent on creating a new world order through an escalating series of terrorist attacks. Ethan joins forces with disavowed British agent (Rebecca Ferguson), who may or may not be a member of this rogue nation, as he faces his most impossible mission yet. (PG-13 – 132 minutes)

“Mission: Impossible – Rogue Nation” features a few scenes that are fairly impressive to behold – namely an underwater heist sequence and a vehicular chase through the streets of Morocco. Those two moments in the new movie, which is the fifth film in the franchise based on the classic television series by the same title, are exceptionally thrilling and will have viewers holding their breath and gripping their armrests with anxiety. However, they are somewhat of a step down in creativity from the previous installment “Ghost Protocol,” as is the motion picture as a whole which is closer in theme to the series’ roots – a quality whose value is dependant upon personal taste. (Thumbs Up!) 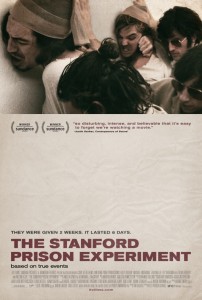 Billy Crudup plays a psychologist who selects 24 male college students to take on randomly assigned roles of prisoners and guards in a mock prison situated in the basement of the Stanford psychology building. (R – 122 minutes)

It is exceptionally difficult to watch director Kyle Patrick Alvarez’s new deeply disturbing dramatic thriller “The Stanford Prison Experiment” yet you will be absolutely unable to turn away from the screen. It is a completely compelling depiction of the real 1971 experiment implemented by psychologist Dr. Philip Zimbardo. The presentation is executed with such extreme authenticity in both Alvarez’s nerve-wracking vision and the recognizable actors’ ability to disappear into their roles that viewers succumb to their senses and perceive the motion picture as though it were a documentary. Its psychological implications are thoroughly thought-provoking but even more disquieting. (Thumbs Up!) 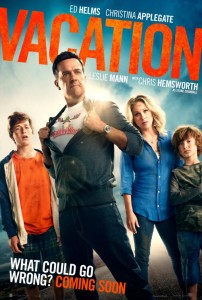 Ed Helms takes on the role of a grown up Rusty Griswold who decides to takes his family on a road trip to Walley World in order to spice things up with his wife (Christina Applegate) and reconnect with his sons (Skyler Gisondo and Steele Stebbins). (R – 99 minutes)

“Vacation” is the laugh-out-loudest comedy of the summer, consistently leaving viewers in stitches every step of the way to Walley World. The new sequel to National Lampoon’s classic film franchise honors its predecessors while also upping the ante, modernizing the humor for a new generation. Skyler Gisondo easily steals the show as the exasperatingly awkward James Griswold but the entire cast comes together terrifically, forming a family whose funny misadventures make for one of the most entertaining times you will have in a movie theater this season and culminate with just the right amount of heart. (Thumbs Up!)

‘The Young and Prodigious T.S. Spivet’ 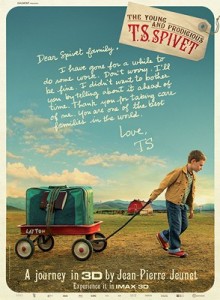 Kyle Catlett plays a gifted child with a passion for science who, having been awarded the prestigious Baird Prize by the Smithsonian Institution for his invention of a perpetual motion machine, leaves a note for his family and hops a freight train, traveling from a remote ranch in Montana to Washington to receive his prize. (PG – 105 minutes)

“The Young and Prodigious T.S. Spivet” may star a child and feature family-friendly content (save for a few select moments) but the new whimsical drama will undoubtedly be best appreciated – and understood – by adults; and even they may have a hard time following the film’s excessively eccentric narrative. Granted, one would not expect anything else but inordinate imagination from writer/director Jean-Pierre Jeunet – the visionary mind behind “Amelie” – but the end-result may leave some viewers a bit dizzy and discombobulated. However, even if you do not completely comprehend its various intricacies, the movie is unequivocally charming. (Thumbs Up!)