‘Scouts Guide to the Zombie Apocalypse’ touches, tickles and terrifies

Among the new movies that were released Friday, Oct. 30 is a coming-of-age zom-com.

‘Scouts Guide to the Zombie Apocalypse’ 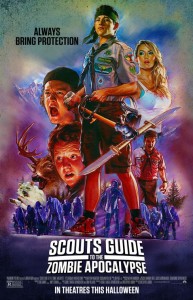 Tye Sheridan, Patrick Schwarzenegger and Logan Miller play scouts who, on the eve of their last camp-out, discover the true meaning of friendship when they attempt to save their town from a zombie outbreak. (R – 93 minutes)

“Scouts Guide to the Zombie Apocalypse” is an obscenely funny comedy that manages to simultaneously scare and even offer up some mildly moving coming-of-age moments. Granted, there are plenty of low blows in the new flick but they all result in fits of laughter and leave viewers with goofy grins spread across their faces. The movie is a rip-roaring ride from beginning to end, never letting its foot off the gas as it splatters blood and body parts in every conceivable direction. Its surprisingly large – and still-beating – heart is what sets it apart and brings it to life, though, touching as well as it tickles and terrifies. (Thumbs Up!)