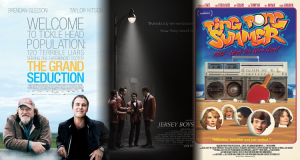 Among the new movies that were released Friday, June 20 are a dramedy set in a small town, a cinematic adaptation of a Broadway musical and a comedy about growing up during the 1980’s.

Taylor Kitsch plays a big city doctor who lands in the lap of a small fishing village that must procure a physician in order to secure a lucrative business contract. Upon his arrival, the townsfolk rally together to charm him into staying. (PG-13 – 115 minutes)

“The Grand Seduction” is neither satirical enough nor cute enough and therefore falls right in the middle of the two extremes. And if you are not laughing out loud or feeling genuinely moved then you are more than likely just bored while you watch these simple townsfolk try to woo a big city doctor who never exactly comes across as a real character and instead serves as little more than a plot device. Granted, there is great potential here for either comedy or emotional resonance (or preferably both) but the only proficient part of this dramedy is its warm and welcoming setting. (Thumbs Down!)

Clint Eastwood directs the story of four young men from the wrong side of the tracks in New Jersey who came together to form the iconic 1960s rock group The Four Seasons. (R – 120 minutes)

“Jersey Boys” – director Clint Eastwood’s cinematic adaptation of the Broadway stage play about Frankie Valli and the Four Seasons – lacks a certain theatrical energy that would have made it a musical masterpiece but there is no denying the power of not only its fascinating true-life tale but also its genuine nostalgia. Its look alone is enough to enchant older audiences while younger viewers will be smitten by its story, which is essentially one of struggle, success and loyalty through it all. And then there is the music, which transcends age and transports everyone to a far simpler time. (Thumbs Up!)

“Ping Pong Summer” could use a bit more Pop Rocks candy and Pixy Stix powder mixed into its sweet story to give it some much needed energy but it makes enough of an emotional connection to keep viewers’ interest – and hearts – in play from beginning to end. Much like the game that is at the center of its tale, the new coming-of-age comedy is extremely low-key, getting from setup to conclusion without any particularly dramatic moments. However, that “chill” approach lends itself to the 80’s nostalgia that essentially defines this affable film. (Thumbs Up!)