‘Spectre’ is long and complicated but explosive and heart-pounding

Among the new movies that were released Friday, Nov. 6 is the 24th installment in the James Bond franchise. 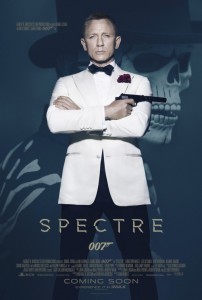 Daniel Craig reprises his role of James Bond who receives a cryptic message from his past that sends him on a trail to uncover a sinister organisation. While M (Ralph Fiennes) battles political forces to keep the secret service alive, Bond peels back the layers of deceit to reveal the terrible truth behind Spectre. (PG-13 – 150 minutes)

The heart-pounding opening scene of “Spectre” – an extravagant Day of the Dead set-piece – is worth the price of admission in and of itself. And that is merely a small fraction of the two-and-a-half-hour 24th installment in the James Bond film franchise. Granted, there are certainly several moments of downtime during the new movie and the story is quite complicated as it attempts to close out the Daniel Craig-era in the 007 saga but the basic formula that has made the series such a success is still there and the explosive action sequences are more than enough to keep audiences on the edge of their seats. (Thumbs Up!)