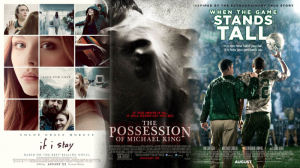 Among the new movies that were released Friday, Aug. 22 are a drama about an out-of-body experience, a thriller about a self-inflicted possession and a football flick about a 151-game winning streak.

Chloë Grace Moretz plays a young girl whose life changes in an instant when a car accident puts her in a coma. During an out-of-body experience, she must decide whether to wake up and live a life far different than she had imagined. (PG-13 – 106 minutes)

Don’t go to “If I Stay.” What could have been a unique update on “It’s a Wonderful Life” is actually just a generic teen romance with a novel plot-point to draw and dupe audiences. Although young girls are likely to swoon over star Jamie Blackley and the sickeningly sweet things he says to co-star Chloë Grace Moretz that nobody would ever say in real life, more discerning viewers will be bored with the back-and-forth between the past and the present and annoyed with the incessant narration that appears to be reciting the screenplay’s unspoken descriptions. It is creativity in a coma. (Thumbs Down!)

Dane DeHaan plays a young man whose recently deceased girlfriend (Aubrey Plaza) mysteriously returns from the dead. He slowly realizes that she is not the way that he remembered her. (R – 91 minutes)

Those looking for a good rom-zom-com (that is romantic zombie comedy), check out “Warm Bodies.” Those looking for a bad rom-zom-com, check out “Life After Beth.” Granted, star Aubrey Plaza gives a great performance as a girl who slowly but surely devolves into a flesh-eating lunatic but everyone around her – including co-star Dane DeHaan and supporting actors like John C. Reilly, Molly Shannon, Cheryl Hines and Paul Reiser – appears to be as unamused by the lifeless script as we are. It is not quite D.O.A. as it starts off with potential but all that decays quite quickly. (Thumbs Down!)

‘The Possession of Michael King’*

Shane Johnson plays a man who, following the sudden death of his wife, sets out to make a movie about the search for the existence of the supernatural – making himself the center of the experiment and allowing demonologists, necromancers and various practitioners of the occult to try the deepest and darkest spells and rituals they can find on him. (R – 83 minutes)

“The Possession of Michael King” operates on an incredibly intriguing premise – one that might make for a truly fascinating film for one daring documentarian. However, as this movie is a mockumentary – or a faux-found-footage flick, if you will – events eventually spiral out of control and a premise with plenty of potential is squandered by a concession to go where just about every motion picture about demonic possession has gone before. Still, the first act or two are quite captivating and star Shane Johnson gives a great performance as his character descends into madness. (Thumbs Up!)

‘When the Game Stands Tall’*

“When the Game Stands Tall” fumbles in the first half but recovers in the second, scoring several triumphant touchdowns that entertain, move and most of all inspire. The new sports drama encourages its viewers to put in their absolute best effort each and every day. Other notable themes include (but are certainly not limited to) teamwork and humility. Its scenes set on the field are sure to thrill fans of the genre yet the action is balanced out with enough emotional appeal to charm general audiences as well. Its only missteps take place early as the film desperately tries to find its footing. (Thumbs Up!)