Tales from the Critic: Is That a Banana in Your Pocket? No, It’s a Plantain

Today’s entry is a twofer – meaning it will contain two days in one. Now before you go accusing me of getting lazy, I would like to note that I had written an entire entry for yesterday but due to technical difficulties its content was lost in cyberspace. And I just don’t have the patience to recreate what was essentially an uneventful day.

Nonetheless, I got out of bed yesterday morning feeling as though I was getting off of a horse. Due to my massive brittlebushing pulling project at the dog park the day before that required me to perform a few hundred squats, my hamstrings were as tender as Elvis Presely’s love. I still managed to work out, though, and then I picked up donations for the food ministry, dropped off a couple of eBay sales at the post office and ran into Wal-Mart to see if they had any of the new snacks I have been looking for – such as Caramel M&M’s and Tositito’s Cantina Sopapilla Cinnamon and Sugar Tortilla Chips. Unfortunately, I emerged empty handed.

As I said, the rest of the day was relatively uneventful as I managed my eBay listings while watching “The Chew” and “Days of Our Lives.” I was particularly frustrated with a buyer who complained that the shipping price on his invoice was $2 more than the one quoted in the listing. I explained to him that I merely wanted to get the item – a “Pinky and the Brain” lithograph print – to him safe and sound. I repackaged the item three times before the buyer agreed that the extra $2 was worth it arriving in one piece. I ended my day with the the extremely emotional series finale of “Bates Motel.” Just say the word, Vera Farmiga – I would kill for a chance to stare forever into your eyes.

Fast forward to today when my hamstrings continued to be about as useful as a baseball bat on a golf course (I don’t do sports but at least I know that much). Once again, I worked out before heading out to drop off a couple of eBay sales at the post office. I also picked up the donations for the food ministry and dropped them off with organizer Karen. Thinking ahead, I asked her if she had a potato and fortunately she did. She also gave me a plantain, which I placed in one pocket, and two white onions, which I placed in the other – and that made me think of a funny joke. Upon arriving home, I quickly ate breakfast before heading back out to the dog park to do some maintenance work.

After that, I returned home and continued to manage my eBay listings. Once “The Chew” started, I got my chef on. I washed my potato, rubbed it with freshly ground sea salt and olive oil, wrapped it in tin foil and placed it in a 400-degree oven. During the 45 minutes it was baking, I followed up with the publicist I had e-mailed earlier in the week to inquire about interview talent availability and screening opportunities for the new film “How to Be a Latin Lover.” I had been approved to screen the film but they sounded less than optimistic about talent availability so I researched my options for other guests. When my potato was fully baked, I sliced it in half, spread some butter on it, poured my leftover mock Skyline Chili over it and sprinkled some onions and finely shredded cheddar cheese on top for a homemade 3-Way Potato… 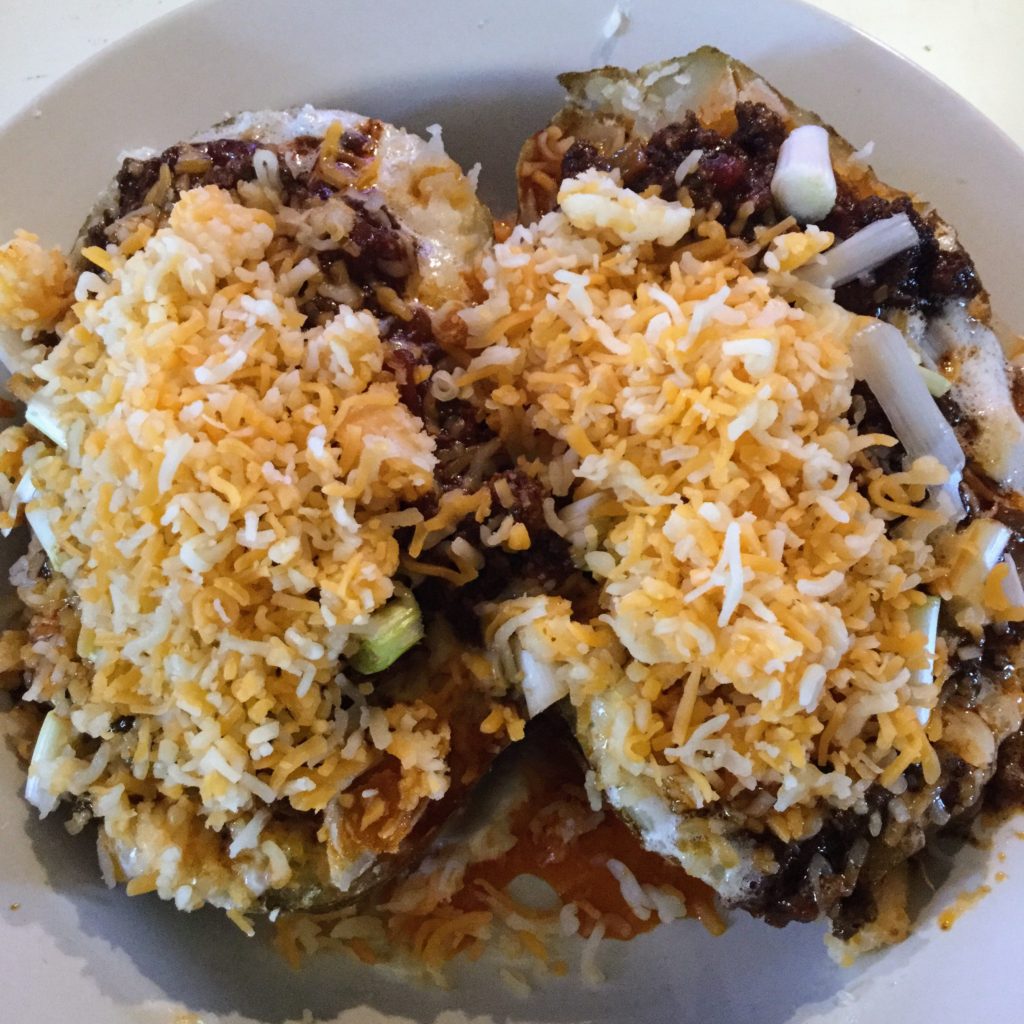 Later, I watched “Days of Our Lives” and listed a few more items for sale on eBay. I laid down briefly to stretch out my sore hamstrings, rest my weary eyes and calm my mind – which seems to have been in a constant state of panic lately – but mere minutes after doing so an unwelcomed visitor paid a visit and caused my anxiety to flare up. I decided to use music to alleviate my nerves as I started selecting Latin love songs to play during this Saturday’s Breakthrough Entertainment. A little later I sliced the plantain on a bias and tossed the slices in a mixture of salt, cinnamon and sugar. I then fried them in butter and ended up with this tasty treat… 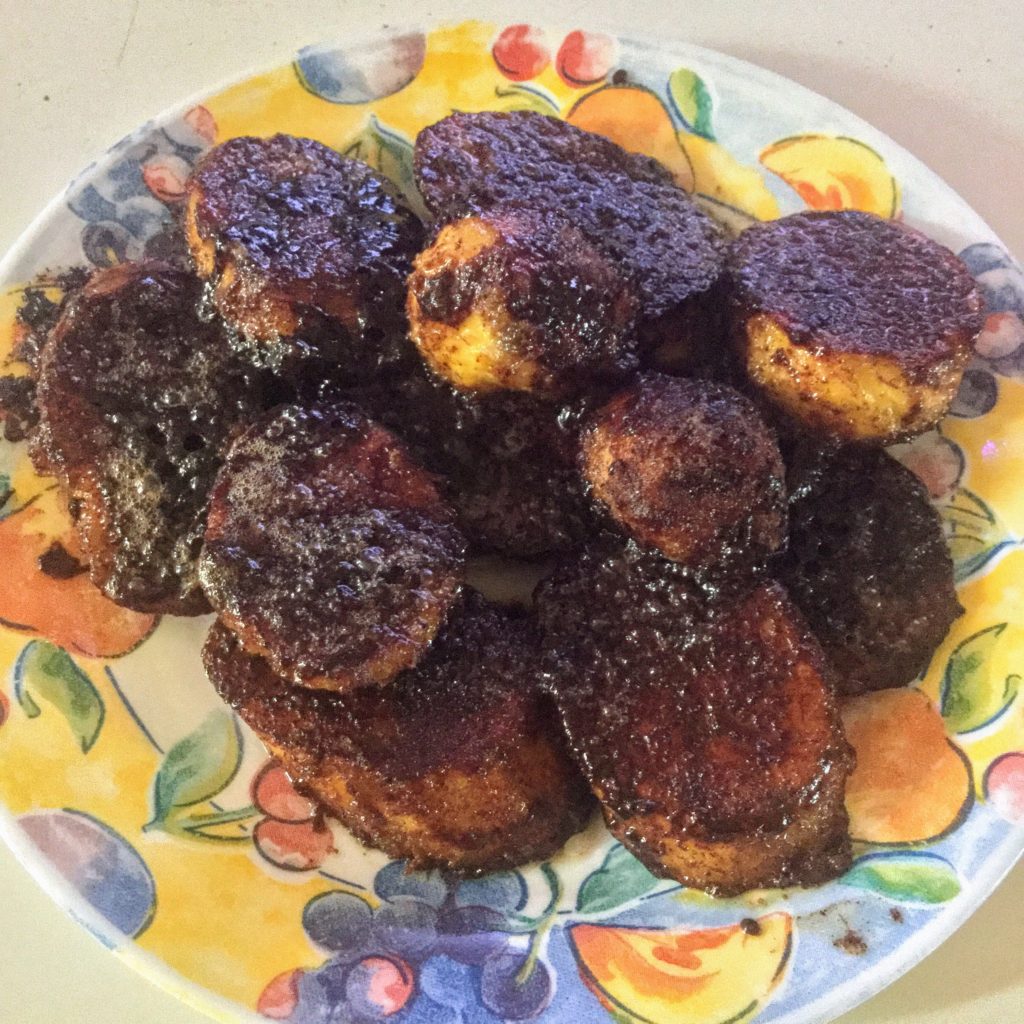 I wrapped up my day by screening “How to Be a Latin Lover.” Tune in to Breakthrough Entertainment 10-11 a.m. PST this Saturday, April 29 on KPHX 1480 AM for my review and to show us your sexy.