The Greatest Entertainer of Our Time 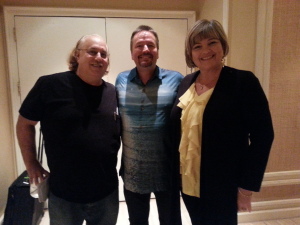 Whether it is the holiday season or just another day of the week, there are those special individuals that have such a passion for life that the gifts and talents they give to the world result in pure joy and happiness with lots of smiles.  When you meet such an individual you can’t help but beam with admiration, respect and praise for what they do, how they do it and the impact they have on others.   I came across such an individual a week ago Monday evening and I was in total awe of the impact he had on his audience.   Fun, laughter, joy, warmth, touching moments and amazement.  Amazement in the fact that this was a variety show with 9 characters (Puppets) however each played by the same individual.  His name is Terry Fator and his show is called Country Christmas now playing at the Mirage Hotel in Las Vegas through December 25th.   Terry has this unique ability to combine humor with singing and witty dialogue as a ventriloquist.   And if that is not enough, Terry impersonates to perfection the singing voices of some of the most popular musical artist of our time.  From Cher to Louis Armstrong to Judy Garland, along with Etta James, Barry White, Bing Crosby, Garth Brooks, Eartha Kit, Rod Stewart and others.   What is amazing is his ability to control his body language as he transfers the singing, passion, rhythm and movement to the puppets while he maintains his part as the puppeteer.   This is a talent I have never thought possible however Terry Fator does it with perfection.   I can only imagine the difficulty of being a ventriloquist, yet adding the impersonation of the best and well known singers of our time and still yet, able to transfer the passion, rhythm and movement while maintaining a sidekick position, is nothing short of remarkable.   Terry Fator’s Country Christmas is a show suitable for the whole family as it incorporates a festive celebration of Christmas including song selections of some of the best Christmas songs ever made (White Christmas, Santa Baby, Baby It’s Cold Outside, O Holy Night, Winter Wonderland, and many more), along with a set design that overflows with warmth as if you were sitting in your own living room with Terry and his cast of characters and other cast members including Taylor (Terry’s wife), Ben Harris (Dancer and opening act) and a Fabulous band.  The set design included a Christmas tree, presents, screens in the background that complimented each character along with a nice fire on the screen at center stage to give a comfort and coziness of bundling up next to a fire.   The puppets that came to play at this extraordinary Christmas show were very funny with unique personalities.  Some of the puppets included:   Winston (A turtle who can impersonate any singer).   Maynard Thompkins (The world’s greatest Elvis impersonator who doesn’t’ actually know any Elvis songs).   Duggie Scott Walker (Terry’s annoying neighbor, a hard partying dude who lives in Nevada with a Colorado state of mind).   Vikki the Cougar (Vikki is the ultimate cougar, always on the prowl for young men who live rich and see poorly).   Plus many of the other puppets that are part of Terry’s stable of characters.   If you truly want to make this Holiday season something you will never forget, see Terry Fator’s Country Christmas now playing through December 25 at the Mirage Hotel in Las Vegas.   And after Christmas, you can catch Terry Fator:  “The Voice of Entertainment” performing all year long at the Mirage Hotel in Las Vegas.

As Founder and creator of “Breakthrough Thinking Broadcasting Network” (BTBN) which is a Media / Business model, Dave also is the host and producer of each show under BTBN which includes the popular radio shows “Breakthrough Thinking”  (Business Psychology), “Breakthrough Sports” (Sports commentary, interviews and news) and “Breakthrough Entertainment" (Entertainment related news and interviews). Dave’s abilities extend beyond hosting and producing. He also reports on various sports and entertainment events including interviewing high profile people and organizations. His business skills come from 30 years’ experience of being a CPA and business consultant and owner of (David S. Isaac P.C. - A CPA and Business Consulting firm) as well as his experience, knowledge and education in Neuro Linguistic Programing (NLP). Dave is a certified Master Practitioner in NLP and owner of Designing Success Inside, LLC (www.acceleratedmastery.com) NLP is the study of human excellence. For a complete bio see:   http://acceleratedmastery.com/bio.php