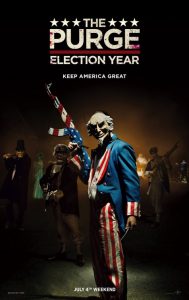 Frank Grillo reprises his role as a former police sergeant who, two years after choosing not to kill the man who killed his son, has become head of security for Senator Charlene Roan (Elizabeth Mitchell) – the front runner in the next presidential election due to her vow to eliminate the Purge. (R – 105 minutes)

“The Purge: Election Year” may be a relatively decent action flick but it fails fairly miserably at being a horror flick. Moreover, it is certainly a far cry from the direction that most fans of “The Purge” franchise likely had hoped the story would go. Granted, it is thought-provoking and will likely lead to a lot of discussion with whoever you choose to accompany to the movie theater but what was once gruesome and suspenseful is now busy and blunt. Writer/director James DeMonaco goes off in too many directions while relying too heavily on gunfire thereby changing the entire tone of the project. (3 Stars)