‘The Secret Life of Pets’ 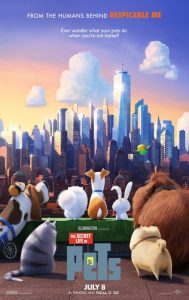 Louis C.K. voices a terrier who regularly invites his friends to hang out at his place while his owner is gone. But his quiet life is upended when said owner also takes in a stray mutt (Eric Stonestreet) who he instantly dislikes. Other voice talents include Kevin Hart, Jenny Slate, Ellie Kemper, Albert Brooks, Lake Bell, Dana Carvey, Bobby Moynihan and Steve Coogan. (PG – 90 minutes)

The beginning and ending of “The Secret Life of Pets” will touch the hearts of anyone who has ever experienced the overwhelming, undying, overpowering, unconditional, all-encompassing, heart-enriching, mind-expanding, on-going, never-ending love of a pet. After all, who does not know how hard it is to leave your best friend for the day or how joyful it feels to return to them at the end of it. However, everything in between is too chaotic, lacking any genuine emotion or clever ingenuity and instead relying simply on colorful action to keep audiences engaged. It is a lot of fun but it fails to reach the depth it could have achieved with a more grounded approach. (3 Stars)