Among the new movies that were released Friday, Dec. 11 are a comedy from “Napoleon Dynamite” writer/director Jared Hess, a true adventure from director Ron Howard and a western starring none other than Adam Sandler. 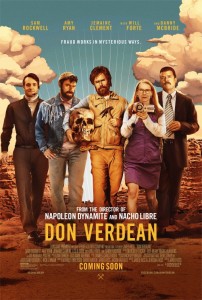 Sam Rockwell plays a self-proclaimed Biblical archaeologist who, hired by an ambitious small-town pastor (Will Forte) to find sacred relics in the Holy Land, comes up short and his attempt to cover up his failure fuels a comic conspiracy. Amy Ryan, Jemaine Clement and Danny McBride also star. (PG-13 – 90 minutes)

“Don Verdean” may not be nearly as overt as some of writer/director Jared Hess’s previous motion pictures – especially “Napoleon Dynamite” – but its inherent niceness and moral values make it impossible to dislike. The new comedy has a little bit of a bite when it comes to its satirical approach to religious beliefs but its heart is enormous and its final moments will bring a bright smile to your face. Stars Sam Rockwell and Jemaine Clement are terrific while Hess’s avoidance of a mean-spirited sense of humor is remarkably refreshing. (Thumbs Up!)

‘In the Heart of the Sea’ 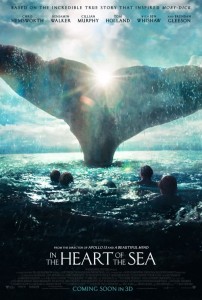 A whaling ship is preyed upon by a giant whale, stranding its crew at sea for 90 days, thousands of miles from home. Stars include Chris Hemsworth, Cillian Murphy and Brendan Gleeson. (PG-13 – 121 minutes)

“In the Heart of the Sea” is director Ron Howard’s worst motion picture – a failure as colossal as the whale featured in the film itself. The new true adventure flick is beyond boring, getting exponentially worse as it goes on until only a few of the remaining viewers who have not gotten up to leave the theater are left with their eyes still open. The whale is a somewhat entertaining creature but its screentime is reduced to mere minutes in a more than two-hour movie that consists mostly of full dialogue between uninteresting characters. (Thumbs Down!)

“The Ridiculous 6” is star Adam Sandler’s best movie in years. However, if you go in expecting a straight-forward comedy, you may be a bit disappointed – especially since the new flick starts off somewhat slow. Granted, it is a comedy and features a mix of the juvenile jokes of Sandler’s recent ventures and the more organic gags of his past projects, but the film could better be described as a western with comedic elements as it is far more dependent on its story than you might expect. One way or the other, though, its cast is incredible. (Thumbs Up!)