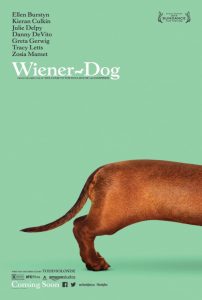 A dachshund is taken in by a veterinary technician (Greta Gerwig), who soon sets off on a road trip. The lovable dog also encounters a young boy, a film professor, and a troubled grandmother and granddaughter. Other stars include Ellen Burstyn, Kieran Culkin, Julie Delpy and Danny DeVito. (R – 90 minutes)

There are undoubtedly going be a few vehemently angry moviegoers who see “Wiener-Dog.” Even those who are familiar with writer/director Todd Solondz’s approach may be a bit shocked before all is said and done. However, just because it is not your typical touchy-feely dog movie (it is not actually about the dog so much as it is about the various eccentric humans it encounters) does not necessarily mean it is not a good movie. The new dramedy loses a bit of its footing in the second act but its bitter sense of humor and tragic tone is certain to stay with you long after the end credits have rolled. (3 Stars)