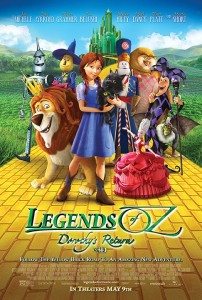 Writer Roger Stanton Baum recently spoke with “Breakthrough Entertainment” about “Legends of Oz: Dorothy’s Return,” the new animated adventure based on his book “Dorothy of Oz.”

In “Legends of Oz: Dorothy’s Return,” which opens Friday, May 9, Lea Michele voices Dorothy who wakes up in post-tornado Kansas, only to be whisked back to Oz to try to save her old friends the Scarecrow (Dan Aykroyd), the Lion (Jim Belushi), the Tin Man (Kelsey Grammer) and Glinda (Bernadette Peters) from a devious new villain – the Jester (Martin Short).

Listen to “Breakthrough Entertainment’s” full interview with Baum by clicking HERE. The following is an excerpt from the interview in which the writer discusses what he hopes that moviegoers take away from “Legends of Oz: Dorothy’s Return.”

“It occurred to me that you want to write [an ‘Oz’ book] that is not going to insult the millions of ‘Oz’ fans out there. You want to make it ‘Oz-y.’ So I just hope that it follows the regular themes of ‘Oz.’ You have Dorothy – who is really one of the very first women leaders – alongside the Tin Man, the Scarecrow and the Lion. Even Toto is in there. I use them and then I have some new characters, too, and they all go down the yellow brick road.

“What they get out of it is adventure, love, understanding, hope and wholesomeness. If I were to use one word I suppose that would be it. It is a wholesome story that is nonviolent. My great granddad [L. Frank Baum] believed in ‘Oz’ not having anything that would scare a child. I try to follow that line of thinking – no violence; only heart, wisdom and courage – and that wholesome feeling that goes along with all of that.

“Even though the original book is called ‘Dorothy of Oz,’ the movie itself is called ‘Legends of Oz: Dorothy’s Return.’ That is an indication that [Clarius Entertainment] wants to do more ‘Oz’ adventures based on my books. They wanted to make it a lead-in to an overall title so it will fit other books and not be so character specific. I am very pleased with the whole production crew.” – Roger Stanton Baum