‘Best of Me’ romances, ‘Fury’ upsets and ‘Rudderless’ moves

Among the new movies that were released Friday, Oct. 17 are the latest cinematic adaptation of a Nicholas Sparks novel, a war flick starring Brad Pitt and about a father grieving his son. 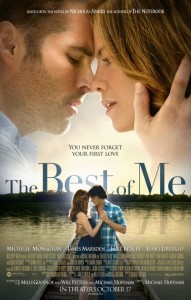 James Marsden and Michelle Monaghan play former high school sweethearts who find themselves reunited after 20 years apart when they return to their small town for the funeral of a beloved friend. Their bittersweet reunion reignites the love they’ve never forgotten. But soon they discover the forces that drove them apart live on, posing even more serious threats today. (PG-13 – 119 minutes)

“The Best of Me” is a remarkably romantic and tremendously touching motion picture. Director Michael Hoffman brings Nicholas Sparks’s novel to the big screen with spectacular beauty, filling viewers with warmth and a renewed belief in fate – even if the end-result is painfully bittersweet. Genuinely charming James Marsden will cause women’s hearts to melt while lovely Liana Liberato embodies every guy’s first flame and Sean Bridgers makes for one verociously vile villain. Granted, some of the dialogue is shamelessly cheesy, but romantics of both genders will eat it up. A word of warning, though – steer clear of the experience-ruining, spoiler-plagued trailer. (Thumbs Up!)

Joel Edgerton, Tom Wilkinson and Jai Courtney play three detectives who become embroiled in a tense struggle after a tragic accident that leaves a child in critical condition. One is guilty of a crime, one will try to cover it up and the other attempts to expose it. (NR – 107 minutes)

Featuring a smart screenplay by star Joel Edgerton, cleverly calculated direction by Matthew Saville and concretized performances by all three leads, “Felony” is the rare crime thriller that acknowledges one very important detail – in real-life, morality is not black or white; it’s gray. Similarly, and contrary to what Hollywood suggests, there is no obvious distinction between who is the good guy and who is the bad guy. Therefore, that makes it extremely easy for viewers to not only empathize with all three characters but become completely engaged in the events that unfold, as well. It also makes for some unsurpassable suspense. (Thumbs Up!) 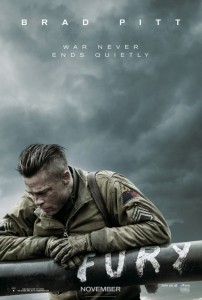 Brad Pitt plays a battle-hardened army sergeant who commands a Sherman tank and her five-man crew on a deadly mission behind enemy lines. Outnumbered and outgunned, and with a rookie soldier (Logan Lerman) thrust into their platoon, he and his men face overwhelming odds in their heroic attempts to strike at the heart of Nazi Germany. (R – 135 minutes)

It takes one a good long time to get into “Fury.” After all, when the new war flick is not boring viewers with static scenes in which its stars are arguing with one another or philosophizing about nonsense, it is disgusting them with shockingly graphic gore. But thanks to some amazing acting (with Logan Lerman, Shia LaBeouf and Jon Bernthal giving the best performances), a nerve-wracking scene set in an apartment and a harrowing grand finale, the movie manages to be precisely the raw, realistic and upsetting cinematic experience fans of the genre have been hoping for. (Thumbs Up!) 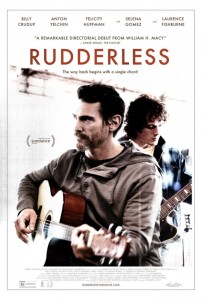 Billy Crudup plays a grieving father in a downward spiral who stumbles across a box of his recently deceased son’s demo tapes and lyrics. Shocked by the discovery of this unknown talent, he forms a band with a young musician (Anton Yelchin) with the hope of finding some catharsis. (R – 105 minutes)

“Rudderless” features a moment of transcendence during which the entire story comes into complete focus and the rest of the world silently slips away. That moment is the final scene as star Billy Crudup performs “Sing Along” – an original song that will sincerely touch your soul while also going a long way toward melting hearts hardened by pain. The new musical drama – William H. Macy’s directorial debut – is an authentically affecting film, elevated by a gut-wrenching twist, a stellar soundtrack and an emotional performance from Crudup that is certain to speak to fathers, sons and anyone else afflicted with heartache. (Thumbs Up!)

‘The Two Faces of January’ 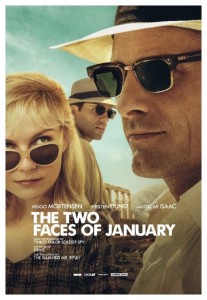 Viggo Mortensen and Kirsten Dunst play American tourists who meet a scammer working as a tour guide (Oscar Isaac). Instead of becoming his latest marks, the two befriend him – but a murder at the couple’s hotel puts all three on the run together and creates a precarious bond between them as the trio’s allegiance is put to the test. (PG-13 – 96 minutes)

“The Two Faces of January” eventually comes to a rolling boil but it simmers for far too long before that, losing viewers’ interest in the process. And that is a shame given the talent of the people involved in the project – both in front of and behind the camera. As the directorial debut for Hossein Amini, who previously penned “Drive,” the thriller lurches along at a placid pace and largely depends upon our patience. Momentary times of intrigue never add up to genuine engagement therefore boredom prevails. A foot-chase during the film’s finale is heart-pounding but also too little too late. (Thumbs Down!)

Michael Shannon plays a man who – in a near future when water has become the most precious and dwindling resource on the planet – defends his farm from bandits, works the supply routes and hopes to rejuvenate the soil. But his daughter’s boyfriend (Nicholas Hoult) wants the land for himself and will go to any length to get it. Elle Fanning and Kodi Smit-McPhee also star. (R – 90 minutes)

“Young Ones” is eventually kind of compelling but it is bogged down by way too much window dressing and not nearly enough narrative. Writer/director Jake Paltrow appears to have wanted to make a futuristic western, juxtaposing robots with dry desert frontier for an ambitious looking piece of cinema. However, his story is about as barren as the world in which these characters are struggling to survive as he squeezes the conflict’s catalyst to extract every last ounce of juice from it. Arthouse audiences may appreciate its stony tone but most moviegoers will be a bit bored. (Thumbs Down!)