‘Dracula’ has bite, ‘Messenger’ kills it and ‘Pride’ feels good

Among the new movies that were released Friday, Oct. 10 are a new take on the origin of the vampire who started it all, an account of investigative journalist Gary Webb who courageously combated government corruption and a historical dramedy about gay and lesbian activists who lend a hand to striking miners. 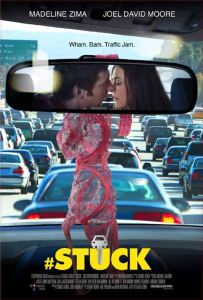 Joel David Moore and Madeline Zima play two people who, get stuck in a dead-stopped traffic jam the morning after a hot one-night stand. As they begrudgingly get to know each other, we learn of their sexually raucous evening and are then led to their surprising destiny. (NR – 84 minutes)

By telling two parts of a story simultaneously – one in reverse and the other at a dead-stop – “#Stuck” extracts meaningful resonance in modern romance. Granted, one-night stands are not exactly romantic but realistic human connection certainly is and that is exactly what writer/director Stuart Acher cultivates in his humorously insightful debut feature. When we are initially introduced to Joel David Moore and Madeline Zima’s characters, they are about as annoying to us as they are to each other. But by both backing up and standing still, they become endearing and identifiable. (Thumbs Up!) 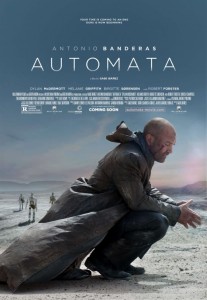 Antonio Banderas plays an insurance agent of a robotics corporation who routinely investigates cases and complaints surrounding defective androids and makes a discovery that has profound consequences for the future of humanity. (R – 110 minutes)

“Automata” starts off slow and even a bit boring but its sci-fi circuits finally start to generate interest at about the halfway point. Director Gabe Ibáñez, who also co-wrote the screenplay, has designed a technologically advanced dystopian future that is immensely stirring but it is not until star Antonio Banderas – giving an award-worthy performance – finds himself alone on-screen with only a handful of robots that things become truly intriguing. Its most exceptional aspect is its surprising spirituality as viewers empathize with robots and think about life’s biggest questions from their perspective. (Thumbs Up!) 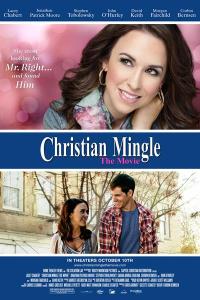 Lacey Chabert plays a young woman who, in a moment of inspired desperation, fills out a profile on ChristianMingle.com hoping to find Mr. Right. However, her attempts at impressing her dream guy end in disaster when he calls her out on her “faux faith.” In an honest realization, she sees her superficial life for what it really is and is driven to create a personal relationship with God. (PG – 99 minutes)

“Christian Mingle” is a cute romantic comedy that will play exceptionally well to Christian audiences while acutely crossing over into mainstream, as well. Writer/director Corbin Bernsen’s new movie may be a bit heavy-handed with its faith-based themes but, at its heart, the story motivates moviegoers to first acknowledge and then remain true to our values. Having said that, the flick features a frustrating ending that somewhat undermines its otherwise empowering messages. Nonetheless, the journey is enjoyable thanks to a charismatic performance from star Lacey Chabert and Bernsen’s clever concept that puts a meaningful spin on a usually frivolous formula. (Thumbs Up!) 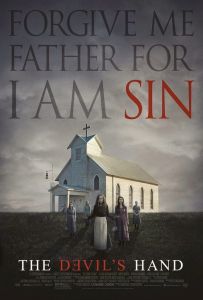 Five young Amish girls accused of being “Satan’s children” must fight for their lives when their devout community elders insist they be “cleansed” before turning 18. Stars include Rufus Sewell, Jennifer Carpenter and Colm Meaney (PG-13 – 86 minutes).

There is potential in “The Devil’s Hand.” Every time the story suggests that human hands may be responsible for the murderous activity taking place, the new thriller becomes kind of intriguing. Unfortunately, though, the film is far more focused on satanic and supernatural elements – none of which are even the least bit fascinating much less frightening. To make matters worse, director Christian E. Christiansen – who also helmed “The Roommate” – uses the tired trick of darkness, frustrating viewers who will be struggling to make out the on-screen action. A final twist is clever but also too little too late. (Thumbs Down!) 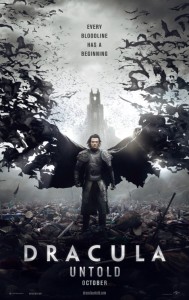 Luke Evans plays a man who, facing threats to his kingdom and his family, makes a deal with dangerous supernatural forces – whilst trying to avoid succumbing to the darkness himself. Dominic Cooper and Sarah Gadon also star. (PG-13 – 92 minutes)

“Dracula Untold” is not the kind of vampire flick to which we have become accustomed in recent years. It takes a far more traditional approach, trading in graphic bloodshed for a time-honored tale of tragedy about the extreme sacrifices one man will make in order to support his wife, save his son and defend his people. The result is an engrossing epic with a surprising touch of humanity. Universal’s precursor to a shared universe of its catalogue of classic monsters may not give you any nightmares but it is still one hell of a blood-tingling adventure. (Thumbs Up!) 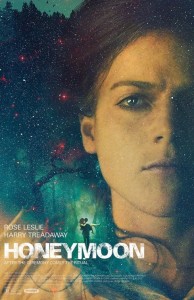 Harry Treadaway plays a man who, shortly after arriving in remote lake country for his honeymoon, finds his new wife (Rose Leslie) wandering and disoriented in the middle of the night. As she becomes more distant and her behavior increasingly peculiar, he begins to suspect something more sinister than sleepwalking took place in the woods. (R – 87 minutes)

“Honeymoon” is the kind of movie that is best if experienced with as little knowledge about its plot as possible. Coming in clueless amplifies the efficacy of its two-tiered tale, which carefully balances between the stuff of real-life newlywed nightmares and spine-chilling science-fiction. Its mystery is sincerely suspenseful but its final few scenes are the icing on this creepy cake as you will find yourself simultaneously nauseated and glued to the screen. Director Leigh Janiak, who co-wrote the screenplay with Phil Graziadei, does an excellent job of escalating uneasiness to eventual enduring disturbance. (Thumbs Up!) 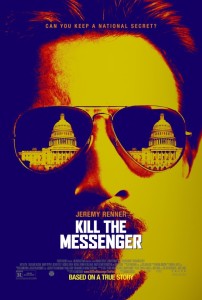 Jeremy Renner portrays a reporter who becomes the target of a vicious smear campaign that drives him to the point of suicide after he exposes the CIA’s role in arming Contra rebels in Nicaragua and importing cocaine into California. (R – 112 minutes)

If you are politically attuned enough to understand the first half of “Kill the Messenger” – or at least patient enough to sit through an awful lot of complicated setup – the new drama will eventually wrap its tight grip around you and elicit extreme anger before breaking your heart. Based on the true story of San Jose Mercury News investigative reporter Gary Webb’s lionhearted effort to expose corruption in the highest echelons of the United States government, the movie showcases a compelling performance from star Jeremy Renner while provoking profound thought about the essentiality of relentless watchdog journalism. (Thumbs Up!) 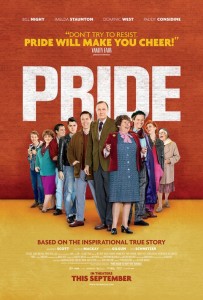 A London-based group of gay and lesbian activists attempt to raise money to help the families of miners during a lengthy strike of the National Union of Mineworkers in the summer of 1984. (R – 120 minutes)

“Pride” is often formulaic and far too cheesy as its characters spout silly lines and join together in song but that should not be so surprising when one considers the new historical dramedy’s title. And it is easy to forgive those faults when one is feeling the uplifting effects that this film affords. In other words, if the emotions are real then nobody minds the fact that the means are manipulative. What is somewhat troubling though are the occasional implication that we are all gay at heart and the sometimes hard-to-understand accents. But, at the end of the day, the universal theme of unity’s essentiality is feel-good food-for-the-soul. (Thumbs Up!)

Hilary Swank plays a classical pianist who is diagnosed with ALS while Emmy Rossum plays a brash college student who becomes her caregiver. (R – 104 minutes)

“You’re Not You” is an excruciatingly painful film to watch – which is a testament to star Hilary Swank’s talent as she believably portrays a woman whose body is slowly swallowed up by Lou Gehrig’s Disease. The actress is heartbreakingly captivating, exhibiting with absolute authenticity the devastating effects of the disease that renders one’s muscles useless while keeping one’s mind completely intact. The new drama is more than just a showcase for Swank’s artistry, though, as the tale itself is tremendously touching – resonating emotionally beyond just ALS sufferers straight through to anyone who has ever mourned the skills or experiences of which they have been robbed. (Thumbs Up!)